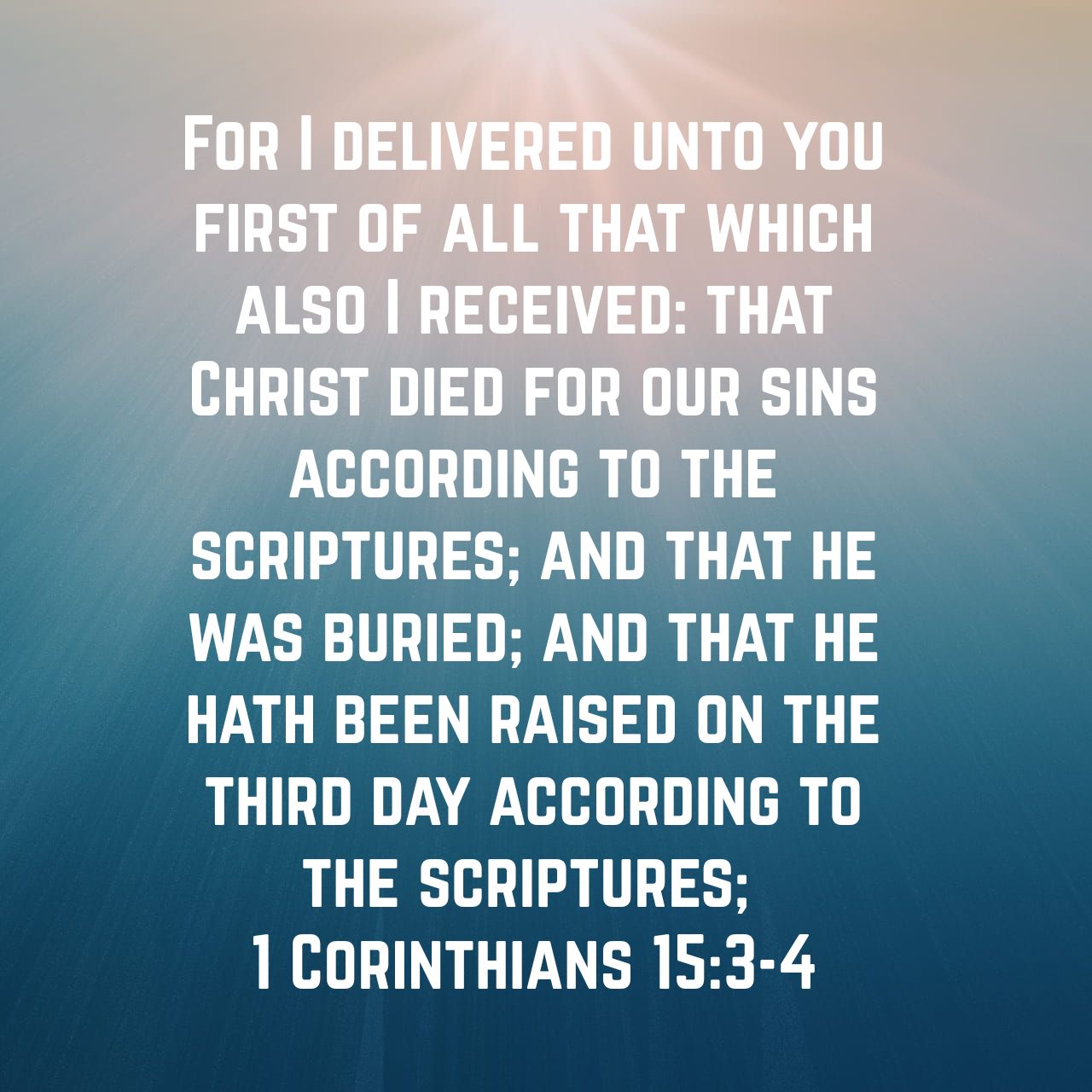 ‘According to the Scriptures.’

As far as we were able to determine, these two verses from 1 Corinthians, chapter fifteen, are the only places in the primary English translations of the Bible, where this phrase, According to the Scriptures, is to be found. Those versions include the King James, the New King James, the American Standard Version, as well as the New American Standard Version. In fairness, the New International Version (NIV) also translated the Greek as According to the Scriptures, while a few less familiar, and some more familiar, such as the English Standard Version, rendered these two verses, in accordance with the Scriptures, amounting, admittedly, to the same thing. But our thought is toward the importance of the Gospel being, indeed, that it is pre-eminently, According to the Scriptures; that is, ‘According to the Word of God.’ Paul claims this principle also in his letter to the Galatians, where he stated what his gospel was, when he declared, For I make known to you, brethren, as touching the gospel which was preached by me, that it is not after man. For neither did I receive it from man, nor was I taught it, but it came to me through revelation of Jesus Christ.

That is precisely what the Scriptures are, the revelation of Jesus Christ.

The struggle for the true Gospel, is and, we would maintain, has always been, whether it is ‘after man,’ as Paul reckons some ‘gospels’ to be, or has it come to us through the revelation of Jesus Christ. Or, in other words, is it according to the teaching of some individual, ‘after man,’ or is it ‘According to the Scriptures’? Is it God-centered, Christ-centered, or is it man-centered? Paul could not be more clear:

Paul’s gospel was not man-centered, but rather God-centered, because it was set forth by him according to the Scriptures, which are the very Word of God; the Word inspired by God, the Holy Spirit. When faith, true God-given faith, hears the Word of God, it hears the voice of the living God; the child of God hears the voice of its Father in heaven. And just as Christ has informed His listeners in John 10, as well as ourselves, the sheep hear his voice: and he calleth his own sheep by name, and leadeth them out. He says further, They know his voice. And a stranger they will not follow. Is Christ here preaching and teaching the doctrine of election? Yes, He is! Is He teaching and preaching the sovereignty of God in His message about the sheep? Yes, He is! Is He teaching the doctrines of grace; indeed He is! Is He teaching and preaching Calvinism? Certainly not! Is he teaching Arminianism? Certainly not ! Then what is He preaching? He is preaching that His sheep hear His voice because they are His sheep. He is teaching that His sheep will not follow a gospel call that is ‘after man.’ A stranger they will not follow. Why not? For they know not the voice of strangers. By the regenerating grace of God, they ‘gifted’ to tell the difference. They have received the precious gift of faith. With regeneration grace they were given both repentance and faith. For by grace have ye been saved through faith; and that not of yourselves, it is the gift of God, not of works, that no man should glory.

Paul could well have said, For by grace have ye been saved through faith; according to the Scriptures for we read in the Scriptures, in Ezekiel 36:26-27, the blessed covenant of promise given by Jehovah through the prophet, to His sheep.

A new heart also will I give you, and a new spirit will I put within you; and I will take away the stony heart out of your flesh, and I will give you a heart of flesh. And I will put my Spirit within you, and cause you to walk in my statutes, and ye shall keep mine ordinances, and do them.

That is the wonderful New Covenant promise of God to His people; that indeed is the gospel of God according to the Scriptures.

Two men are standing at a gathering and hearing the very same message from a speaker. The speaker is preaching that Jesus Christ came to save sinners; he is telling his audience that Jesus Christ came to seek and to save the lost; he informs them that there is only one Mediator between God and men, himself man, Christ Jesus. He reminds them that all men are sinners; that none can save themselves; none can make themselves right with God; none can themselves satisfy the justice of God that has cried out since the fall in Eden, Thou shalt surely die.  While listening to those words of God being pronounced, one of these men, using the words attributed to John Wesley, ‘felt his heart strangely warmed.’ This man cried out with those at Pentecost, whether silently or vocally; whether to himself or to others around, ‘what must I do to be saved?’ He had heard the voice of his Shepherd; he had heard the Gospel of Jesus Christ, the Lamb of God slain from the foundation of the world, and he then began to follow the Lamb whithersoever He goeth. He had heard the Shepherd’s voice and he knew it to be his Shepherd’s voice.

At the same time, this man’s companion, having heard the same words from the same mouth, was absolutely unmoved. He felt no strange warmth; he heard not the voice of the Shepherd; he felt not himself to be lost; he was totally unchanged. Why was this so? What made the grand difference? Who made the great difference? Why was there, in the one individual, no effect at all to be seen or heard? Why was there no alteration in the one man, while at the same time, at the very same time, we can say, was there this imposing radical change upon the other man? It was indeed, even as Paul has said, according to the Scriptures. We refer to another place in this epistle to the church at Corinth. Paul puts it rhetorically, in 1 Corinthians 4:7, For who maketh thee to differ? And what hast thou that thou didst not receive? God made the one to differ because of His glorious faithfulness to His covenant promise cited above from Ezekiel 36; He gave one of these men a new heart and a new spirit.

This Week’s Focus Passage: Luke 18:35ff. And he cried, saying, Jesus, thou son of David, have mercy