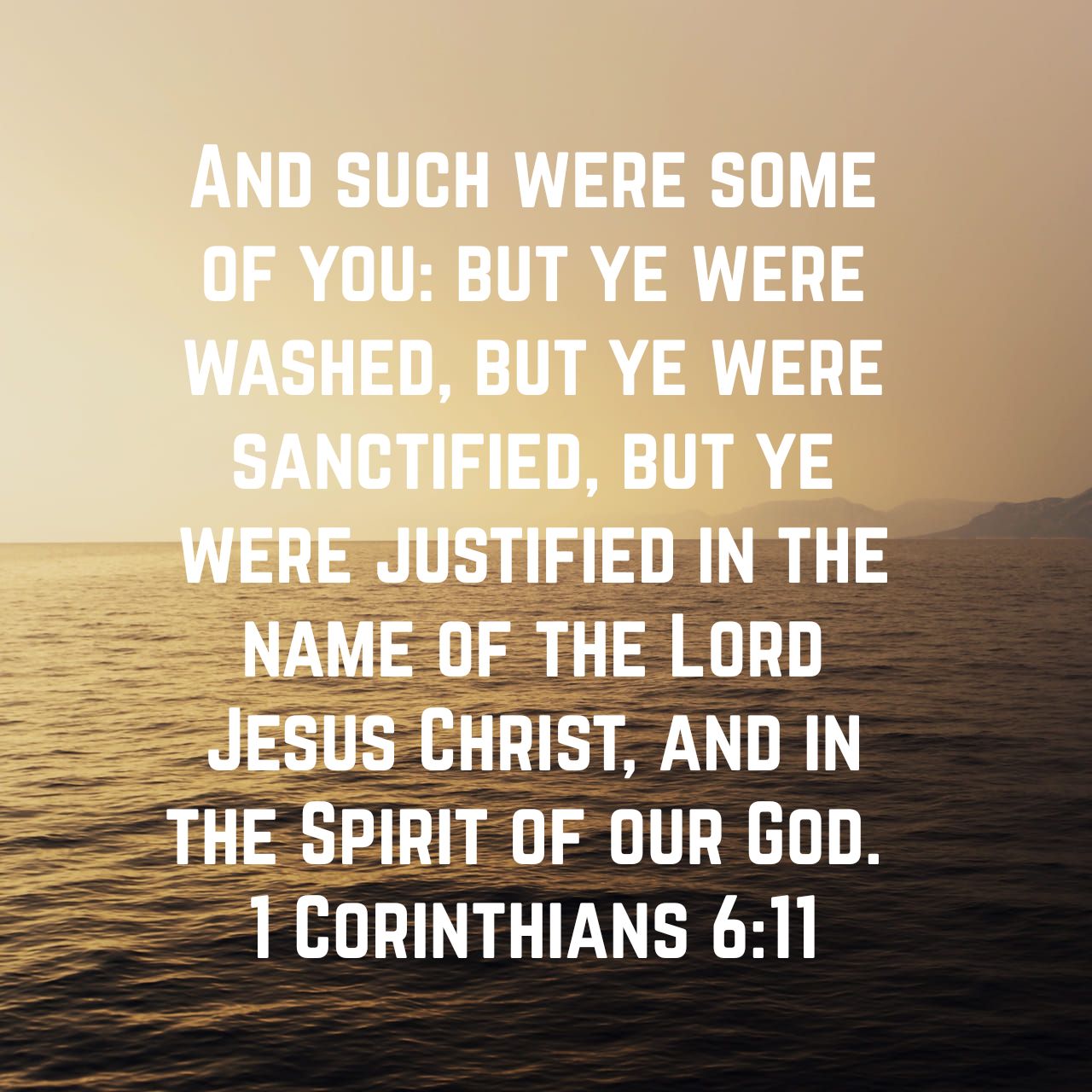 ‘And such were some of you: but ye were washed.’

This is the blessed conclusion at which our apostle, Paul, arrives in his significant litany of the past lives and offences of many in the church; many who were rescued by the grace of God from the bondage they were in to these sins. Let us review the context found in verses nine through eleven:

Or know ye not that the unrighteous shall not inherit the kingdom of God? Be not deceived: neither fornicators, nor idolaters, nor adulterers, nor effeminate, nor abusers of themselves with men, nor thieves, nor covetous, nor drunkards, nor revilers, nor extortioners, shall inherit the kingdom of God. And such were some of you: but ye were washed, but ye were sanctified, but ye were justified in the name of the Lord Jesus Christ, and in the Spirit of our God.

As the apostle has written these words to the church of God which is at Corinth, even them that are sanctified in Christ Jesus, called to be saints, with all that call upon the name of our Lord Jesus Christ; is it not a most striking panorama—“a wide view in all directions,” Webster’s—of sinners ever put on display before our eyes? Can we grasp, or even believe, that Paul is here addressing members of the Christian church at Corinth? There are no less than ten very grave sins set forth in this litany. Is it even possible that these charges truly applied to the hearers of Paul, or for that matter, the readers, ourselves?

When Paul has said, subsequently, and such were some of you, he has, in the use of the word ‘some,’ set some others outside of these charges, or reminders. In other words, they were not guilty of these particulars sinful behaviors that are expressly mentioned; these ten: fornication, idolatry, adultery, effeminacy, abusers of themselves with men—(homosexuals; sodomites), thievery, coveters, drunkards, revilers, extortioners. If we examine ourselves, is it not possible, perhaps even likely that we may find that, in our history, we were even such as some of these numbered in this listing as Paul has set it forth? And are we not called upon in numerous examples in the Scriptures to do just that; to examine ourselves? Perhaps the most familiar occurrence is that found in this same epistle of Paul to the church in Corinth and at chapter 11:28, in the context of approaching the Table of the Lord. Paul says to those that would do so, But let a man prove himself, and so let him eat of the bread and drink of the cup. In this representation of the ASV-1901, the Greek dokimazo is rendered prove while in many other translations examine has been employed. Vine suggests that its meaning is ‘to test, prove, with the expectation of proving.’ Again, there are numerous instances of the usage of this word in the New Testament. Paul has used dokimazo also in 2 Corinthians 13:5, where he exhorts his reader, Try your own selves, whether ye are in the faith; prove your own selves. Perhaps that is his intention in the context of our focus passage when he opens with, Or know ye not?

So this faithful apostle calls us to search our hearts, but we are not adequate to the task without help. David has given us a wonderful example to imitate in his plaintive Psalm 139, as he closes that psalm with verses 23-24:

Search me, O God, and know my heart: try me and know my thoughts; And see if there be any wicked way in me, and lead me in the way everlasting.

What a grand team these two, David and Paul, make to lead us into the depths of our hearts. They are beautifully yoked together in the Lord Jesus Christ, and now sitting before Him, together with Abraham, Isaac, and Jacob. What excitement of heart will there be when Abraham, Isaac, and Jacob, are gathered together at the feet of Jesus, along with David and Paul, and a great swelling multitude of those lovers of Jesus Christ, when the great I AM will say once again to them:

The words of Paul ringing again, absolutely true, of course, ‘Or know ye not that the unrighteous shall not inherit the kingdom of God?’

Here sitting together are these inheritors of the kingdom of heaven; David, a wicked lecherous adulterer, to whom God had made to be the king of Israel, given to him wives and children, honor and fame, more than any man could ever want or need, and yet he must have Bath-Sheba,  and becomes also, in his attempt to cover up his sin with this wife of Uriah,  a conspiring and premeditative murderer of one of the most loyal officers in his army, Uriah the Hittite; this adultery and murderer inheriting the kingdom of God—Amazing Grace, how sweet the sound that saved a wretch like that. And next to David, in our scene, is this Pharisee of Pharisees, the persecutor of the church of Jesus Christ. according to his own testimony. Recorded for us, in Acts 22:19-20, is this confession of Paul; And I said, Lord, they themselves know that I imprisoned and beat in every synagogue them that believed on thee; and when the blood of Stephen thy witness was shed, I also was standing by, and consenting, and keeping the garments of them that slew him. And what shall I more say? for the time will fail me, if I tell of the many sins of prominent believers. There are none that sinned not, but Jesus Christ came into the world to save sinners, Paul stated in 1 Timothy 1:15, of whom I am chief. This is the point the apostle is making in our focus passage, and we should remind ourselves frequently of it, that we are all sinners saved by the grace of God through the blood of our Lord Jesus Christ. While each of us may not have committed, outwardly and deliberately, every sin here in Paul’s list, when we consider ‘in thought, in word, and in deed,’ can we deny that we have been guilty of, as Paul wrote in Romans 1:32, consent[ing] with them that do them? That is the bad news.

But the good news is that which is contained in our focus passage; yes, such were some of you: but ye were washed. Is that not an astounding message from the cross of our Lord Jesus Christ; Father, forgive them? Yes, Paul is granted the right to declare, elsewhere in Romans, this glorious and grand reality:

BUT YE WERE WASHED; AND THAT IN THE BLOOD OF THE LAMB.