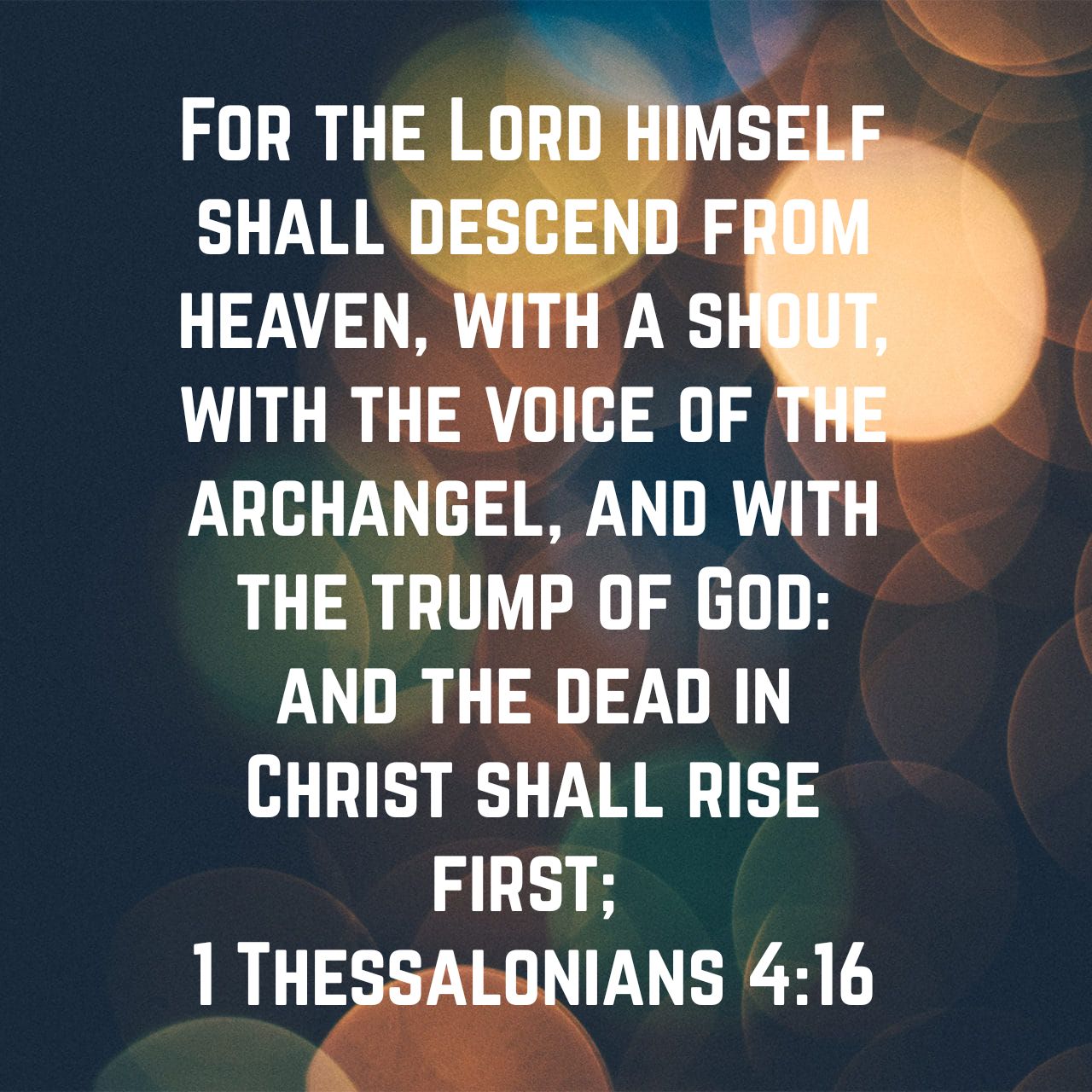 ‘But we would not have you ignorant, brethren, concerning them that fall asleep.’

But we would not have you ignorant, brethren, concerning them that fall asleep; that ye sorrow not, even as the rest, who have no hope. For if we believe that Jesus died and rose again, even so them also that are fallen asleep in Jesus will God bring with him. For this we say unto you by the word of the Lord, that we that are alive, that are left unto the coming of the Lord, shall in no wise precede them that are fallen asleep. For the Lord himself shall descend from heaven, with a shout, with the voice of the archangel, and with the trump of God: and the dead in Christ shall rise first; then we that are alive, that are left, shall together with them be caught up in the clouds, to meet the Lord in the air: and so shall we ever be with the Lord.  Wherefore comfort one another with these words.—1 Thessalonians 4:13-18.

‘We would not have you ignorant,’ begins this final paragraph in the fourth chapter of Paul’s epistle to the church at Thessalonica. And both the paragraph and the chapter are concluded with the words of the eighteenth verse, Wherefore comfort one another with these words. Last week we dealt, necessarily briefly, with a matter connected with the propagation of the Gospel of Jesus Christ; namely, the altar call, and other man-made devices employed in ‘market evangelism.’ This matter, it is our considered belief, is the first of three particular methods, or instruments, made use of in the generation—not regeneration—of the evolution of what we, and many others of like mind, refer to as the system of easy-believism. These three items have formed a chain in this unhappy delusion propounded upon many poor men and women for the space of almost two centuries, if not many more.

As was stated in our previous comments of last week, the manmade revival scenario, with its concluding ‘altar call’ begins this cycle, if we may so term it, of easy-believism. But a conspicuous problem arose in short order. Many were asking the question about the declared results of so many of these ‘revivals;’ that question being, in one form or another, ‘what has happened to all these persons that have so recently ‘gone forward’ having been converted; having become children of the living God through acceptance of the gospel?’ When figures are asserted, perhaps bragged upon, that hundreds, or thousands, of individuals have become Christians, it is not unreasonable for the question to arise in the minds of observers of this phenomenon, even if observed only through a news report, ‘Why is there not an incredible change over the city, or cities, in which this wonder has occurred?’ Surely, such a marvelous, yea, a radical, change would have some effect upon the community. Indeed, the behavior of the disciples; that spoken of by Luke, the human author of the book of Acts, had such an effect as to cause Luke to leave record of it, that the authorities argued that the disciples had ‘turned the world upside down.’—Acts 17:6.

Have we ever been made aware of a ‘revival in our day where its subjects might ever be accused of anything remotely like ‘turning the world upside down’? How is such an inactive ‘conversion’ to be explained? One of the most popular defenses brought forward has been the ‘Carnal Christian Theory.’ This is a theory based upon a seriously flawed understanding of Paul’s first letter to the Corinthians. In the third chapter of that epistle, the apostle asks a rhetorical question of his reader, ‘are ye not carnal, and do ye not walk after the manner of men?’ Many a modern ‘revivalist,’ to call them something, has been conflicted about how to deal with the issue of multitudes being ‘converted’ under their ‘ministry’ and yet there is not any change in behavior. And we are not espousing any teaching that supposes that when one is drawn to our Savior, that they are immediately sinless. We all know better than that personally and individually. Well, there was a man born in 1843, in Clinton, Michigan—no brag, just fact—who embraced a new fad that we now know as Dispensationalism, who later published a copy of the Bible with his study notes as an integral part of that Bible. These notes have been highly influential in the lives of many church members over a period of many years now. His views on the writings of Paul to the church at Corinth, 1st Corinthians, chapter three, are of particular note with regard to his teaching which became known as the Carnal Christian theory.

The Carnal Christian Theory: was given birth, we believe, by C. I. Scofield in his notes on 1 Corinthians 3; “Paul divides men into three classes: (1) psuchikos, meaning of the senses, sensuous, (Jas. 3:15; Jude 19), natural,.  i.e. the Adamic man, unrenewed through the new birth (Jn. 3:3, 5); (2) pneumatikos, meaning spiritual, i.e. the renewed man as Spirit-filled and walking in the Spirit in full communion with God (Eph. 5:18-20); and (3) sarkikos, meaning, caalrnal, fleshly, i.e. the renewed man who, walking “after the flesh,” remains a babe in Christ (1Cor.3:1-4). The natural man may be learned, gentle, eloquent, fascinating, but the Spiritual content of Scripture is absolutely hidden from him; and the fleshly or carnal Christian is able to comprehend only its simplest truths, “milk” (1 Cor.3:2).” This teaching provided license for an understanding of how one could receive Christ and yet conspicuously not be walking with Christ. Thereby, birth was given to many that had not been ‘born again’ by the activity of God the Holy Spirit. They were simply ‘Carnal Christians.’

Anthony Burgess, Non-conformist English clergyman (1600-1663), wrote many years ago, ‘Oh what Antipodes [diametrically opposed] are such men to the Scripture! Either lay down the name of a Christian, or else live above what men of the world do.’ Burgess, obviously, would not have been inclined to conform to the idea of any such thing as the ‘Carnal Christians’ of later generations.

The third angle of this unbiblical triangle is that of the ‘secret rapture.’ Note that we have said, ‘secret rapture,’ we take no issue with the biblical concept of the rapture, as long as it is a reference to the teaching of Paul in 1 Thessalonians 4, as noted in the passage which begins these comments for this week. Paul’s teaching is the promise of a resurrection, not a rapture; definitely not a ‘secret rapture.’ A key element of this teaching is, conspicuously, that it is secret. Attempting to locate the source of this theory, we are told by one writer that John Nelsen Darby, the alleged ‘originator’ of Dispensationalism, had written out, in January 1827, his pre-tribulation rapture views. Others blame it on the young Scottish preacher, Edward Irving, who is regarded as the forerunner of the Charismatic movement. Whichever of these allegations is the true one, it is very likely that the proposition was greatly enhanced and disseminated by the aforementioned Scofield Reference Bible.

Note carefully that it is the Church that is ‘raptured.’ This note, or footnote, is given by way of an explanation of the phrase in v.17, namely, ‘caught up.’ Very difficult it is to imagine how this ‘rapture’ is considered to be ‘secret’ when, according to Paul, it is preceded by the Lord himself shall descend from heaven, with a shout, with the voice of the archangel, and with the trump of God. Try sneaking up on someone in that manner, sometime. And in his second epistle to this church at Thessalonica, we are told about the revelation of the Lord Jesus from heaven with the angels of his power in flaming fire. How secretive could that be?

There was begun something of a ‘revival’ of the entire concept of a secret rapture and a tribulation when Tim Lahaye wrote the first of a series of novels under the title of Left Behind. The ‘plot’ or theme of the entire series revolves around that whole idea of the ‘secret rapture’ where the flip side of many being ‘caught up’ in the air [raptured], necessarily involves many ‘left behind.’ Some of us easily recall seeing bumper stickers such as the one that exhorted other drivers, IN CASE OF RAPTURE, SOMEONE GRAB THE WHEEL. Perhaps the thought of a ‘secret rapture’ appeals to those whose entire system of ‘easy-believism’ seems to entail certain amounts of secrecy. For those responding to the ‘altar call’ there may well be a large amount of secrecy regarding their experience of faith, for most of them have never heard of that which is the necessary ‘other side of the coin,’ repentance. And with respect to a normal Christian need for fellowship with other believers, so many of these individuals show no need or desire to join a body of believers, that is, a church. So as to the new birth, it is to be feared that many such professed believers were still-born; they then show little sign of life; but they cling to the ‘fact’ that one day they will suddenly and secretly be caught up; raptured into heaven at last.

These three features of easy-believism may well, and sadly, be called the unholy triumvirate: walk down an aisle; live as you please; be raptured at last. This, it must be pointed out is in opposition to the holy triumvirate of Mark 13:33, if we may call it so, from those words of Christ; Take heed—watch—pray. In the very next chapter, Paul exhorts, For yourselves know perfectly that the day of the Lord cometh as a thief in the night.

Genesis 49:10 'The sceptre shall not depart from Judah.....until Shiloh come.

Acts 6:1-6 ‘But we will continue steadfastly in prayer, and in the ministry of the word.’

Genesis 49:10 'The sceptre shall not depart from Judah.....until Shiloh come.

Acts 6:1-6 ‘But we will continue steadfastly in prayer, and in the ministry of the word.’

Daniel 3:17 ‘Our God whom we serve is able to deliver us from the burning fiery furnace.’