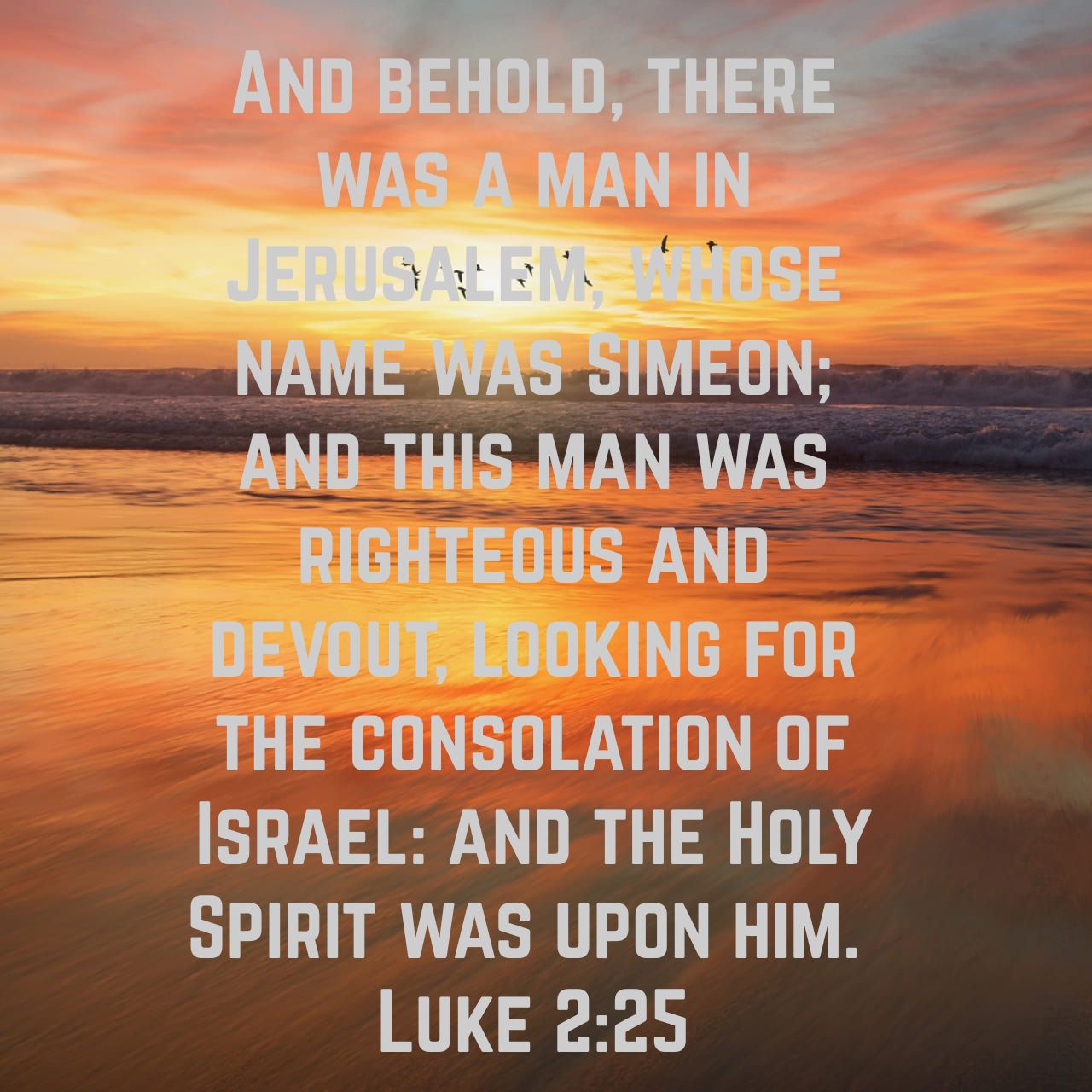 ‘Looking for the consolation of Israel.’

Are we Christians today not looking for the consolation of Israel? This text before us this week, speaks of the man Simeon, about whom Luke has told us, in Luke 2:25-35, that he was encountered by Mary and Joseph as they were bringing their child into Jerusalem; it was after the days of their purification according to the law of Moses were fulfilled. “According to Leviticus 12:1-4, after giving birth to a son, it was not until the fortieth day that the time of her purification were completed.” The fortieth day having arrived, Joseph was bringing both Mary and Jesus to the sanctuary for the first time, to present Him to the Lord, making the appropriate sacrifice for purification; probably in their case, a pair of turtledoves, or two young pigeons. This was the offering permitted for those unable to afford a lamb. They had very little, they were a young couple, and they were of mean circumstances. We might suggest that it was comparable to the conditions spoken of by Charles Dickens in his masterpiece, A Tale of Two Cities, which he opened with:

Examine me, O Jehovah, and prove me; Try my heart and my mind.

Search me, O God, and know my heart: Try me, and know my thoughts; And see if there be any wicked way in me, and lead me in the way everlasting.

We might well ask, as we think again of Simeon, are we, as was he, looking for the consolation of Israel? Was Simeon not likely and fully aware of the promises of Jehovah regarding ‘the consolation of Israel?’ Luke has stated it clearly that it had been revealed unto him by the Holy Spirit, that he should not see death, before he had seen the Lord’s Christ. This was, conspicuously, a very personal revelation with a definite promise to him, individually. And yet, he had many corresponding promises in the Scriptures. For example, Isaiah has provided many; promises that we are able to look back to, the Newer Testament providing their fulfillment in Christ. Isaiah 7:14; a verse particularly reminding us of the birth of the God-man, Emmanuel.

Therefore the Lord himself will give you a sign: behold, a virgin shall conceive, and bear a son, and shall call his name Immanuel. This Son is promised again in Isaiah 9:1-7, the One whose name shall be called, Wonderful, Counsellor, Mighty God, Everlasting Father, Prince of Peace. And in Isaiah 11, the promise that there shall come forth a shoot out of the stock of Jesse, and a branch out of his roots shall bear fruit. In Isaiah 40:1-11, faithful readers of the Word are called upon to Behold your God. He will feed his flock like a shepherd, he will gather the lambs in his arms, and carry them in his bosom, and will gently lead those that have their young. Isaiah, especially, is filled with the promises of the coming of the ‘consolation of Israel.’ We can readily imagine that Simeon had committed Isaiah to his memory. The same Holy Spirit that promised Simeon that he should not see death, before he had seen the Lord’s Christ, caused that he would immediately recognize his Savior in the Person of this babe in Mary’s arms coming into the temple.

Then he received him into his arms, and blessed God, and said,  Now lettest thou thy servant depart, Lord, according to thy word, in peace; For mine eyes have seen thy salvation, which thou hast prepared before the face of all peoples; A light for revelation to the Gentiles.

Ought we not to be looking for the consolation of Israel? Have we not received promises that He was going to return? Has He not clearly said to His disciples at the Last Supper, and to ourselves through them; Let not your heart be troubled: believe in God, believe also in me. In my Father’s house are many mansions; if it were not so, I would have told you; for I go to prepare a place for you. And if I go and prepare a place for you, I come again, and will receive you unto myself; that where I am, there you may be also. And when our Lord had ascended into heaven, were not His disciples [and ourselves] told by the angels as they were looking steadfastly into heaven as He went; as that cloud had received Him out of their sight:

Behold, two men stood by them in white apparel; who also said, Ye men of Galilee, why stand ye looking into heaven? this Jesus, who was received up from you into heaven, shall so come in like manner as ye beheld him going into heaven.—Acts 1:10-11.

Our Savior has promised to return. He has given us exceeding precious promises that He would return for us. Paul has spoken of this in his epistle to the church at Thessalonica; in words most precious for every child of God:

For the Lord himself shall descend from heaven, with a shout, with the voice of the archangel, and with the trump of God: and the dead in Christ shall rise first; then we that are alive, that are left, shall together with them be caught up in the clouds, to meet the Lord in the air: and so shall we ever be with the Lord. Wherefore comfort one another with these words.—1 Thessalonians 4:16-18.

With such great and wonderful promises from Him who cannot lie; from Him who laid down His life for us; and who, while we await His return, even now stands at the right hand of His Father, and ours, ever living to intercede for us. What possible reason could be left us that we should not be, with Simeon of old, gazing longingly, through faith looking heavenward for the Consolation of Israel. It is more than just interesting to note that the word employed by Luke, namely consolation, is the very same word used by Paul in the above citation from 1 Thessalonians. In each case, the Greek word is paraklesis. The Consolation of Israel for whom Simeon was looking is indeed the Comforter. He pointed this out in John 14:16, as He was telling His disciples of His soon departure; He promised in these remarkable words:

And I will pray to the Father, and he shall give you another Comforter, that he may be with you forever, even the Spirit of Truth.

He spoke of ‘another Comforter’ to be with His people; strongly implying that He Himself is our Comforter. Therefore does He say of God the Holy Spirit, that He is Another Comforter. This demonstrates to us that as we look for the Consolation of Israel, we are looking for Christ, the Comforter of His people. May we be keeping our feet upon earth and the eyes of our faith toward the heavens.