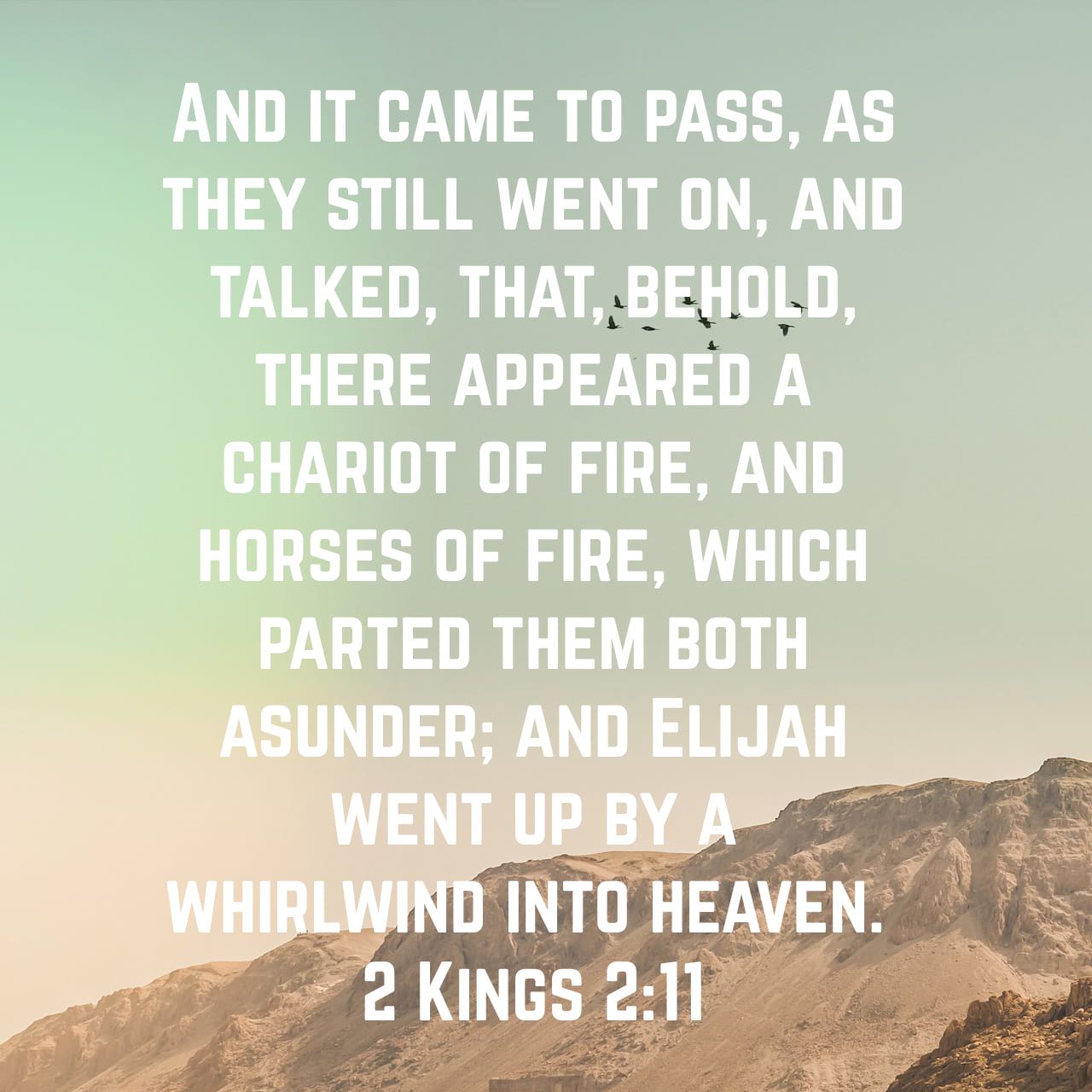 ‘Elijah went up by a whirlwind into heaven.’

What a dramatic exit from the earth was granted to this prophet, Elijah. The first notice given him in the Word of God is almost as dramatic; read at the beginning of the seventeenth chapter, simply that he ‘said unto Ahab, As Jehovah, the God of Israel, liveth, before whom I stand, there shall not be dew nor rain these years, but according to my word. It is as though he came out of nowhere. Of course, he was referred to as, Elijah the Tishbite, so that we may conjecture regarding the place of his origin, perhaps Tishbe. It is helpfully added that, he was of the sojourners of Gilead. It is not fully clear exactly what was his relationship with Tishbe, or Gilead.   This brings to remembrance a character from my childhood who ‘arrived’ on my radio once a week, and who was announced by the brave words of this particular song: “Out of the night when the full moon is bright, comes the horseman known as Zorro. This bold renegade carves a ‘Z’ with his blade; a ‘Z’ that stands for Zorro.”    It is as though Zorro would come from out of nowhere; the same as did our prophet, Elijah, with no previous announcement of any kind. Without any such announcement, his career simply begins with his boldly speaking to the king, Ahab.

The absence of any kind of announcement, or presage whatever, lends itself to the mystery of the individual, Elijah. Many authors have, for this very reason, namely ‘the mystery of his origins, compared him in this respect only, unto Melchizedek, king of Salem (Genesis 14:18), and whom, we are also informed, was priest of God Most High. But we only allude to this rather singular entrance into the history of the Scriptures, largely because this prophet’s exit was equally as singular in Scripture. Elijah went up by a whirlwind into heaven. The only other example in the Word of God of one being taken into heaven apart from death, is the example of Enoch, the seventh from Adam. The writer of Hebrews has written, 11:5, of this man:

By faith Enoch was translated that he should not see death; and he was not found, because God translated him: for he hath had witness borne to him that before his translation he had been well-pleasing unto God.

But to return our thoughts to Elijah; even as he was taken up into heaven in a remarkable fashion and display of God’s powerful grace, so he was ‘found again’ in the writings of the Newer Testament. In the initial appearance of John the Baptist, he is clearly spoken of as the one promised in the prophets. We read in Matthew’s gospel account (Matthew 3:1-3) words of the introduction, as it were, of John:

And in those days cometh John the Baptist, preaching in the wilderness of Judea, saying, Repent ye, for the kingdom of heaven is at hand. For this is he that was spoken of through Isaiah the prophet, saying,

The voice of one crying in the wilderness, Make ye ready the way of the Lord, Make his paths straight.

Jesus’ disciples asked Him (recorded by both Matthew and Mark) why it was that the scribes say that Elijah must first come. The answer given them by Jesus was twofold: Elijah indeed cometh….Elijah is come already, and they knew him not, but did unto him whatsoever they would. Matthew then writes; Then understood the disciples that he spake unto them of John the Baptist. While Luke has not recorded this exchange between Jesus and His disciples, he has intimated the very same truth. In Luke 1:11-17, he relates the visit of the angel of the Lord to Zacharias, the father of John the Baptist. Zacharias is told by the angel that his wife shall bear him a son:

And he shall be great in the sight of the Lord, and he shall drink no wine nor strong drink; and he shall be filled with the Holy Spirit, even from his mother’s womb. And many of the children of Israel shall he turn unto the Lord their God. And he shall go before his face in the Spirit and power of Elijah, to turn the hearts of the fathers to the children.

These words, of course, are a reference once again to the words of Isaiah the prophet.

For all the prophets and the law prophesied until John. And if ye are willing to receive it, this is Elijah that is to come.

The disciple’s questions about Elijah coming followed upon their seeing the prophet at the transfiguration of Jesus. Have you ever pondered about the appearance of these two, Moses and Elijah, at the mount of transfiguration? Why Moses and Elijah? We just cited above Jesus making reference to ‘the prophets and the law.’ Many authors believe that Moses was the representative of the law, while Elijah represented the prophets. Jesus employed these words earlier in His ‘sermon on the mount,’ as it is called by many, in chapter 5, verse 17, when He said: Think not that I came to destroy the law or the prophets: I came not to destroy, but to fulfil.

We have digressed. To return to Elijah’s ‘ascension,’ surely the disciples were aware of the history of Elijah. It must have been astounding to see him now on the mount with Moses and Jesus. In Matthew’s account, previous to the occasion of the Transfiguration, we are informed of Jesus’ giving His disciples more knowledge of His impending death; that he was to suffer many things of the elders and chief priests and scribes, and be killed, and the third day be raised up. Now this did not seem to sit well with the disciples. Peter went so far as to rebuke Him, saying, Be it far from thee, Lord, this shall never be unto thee. There are those that suggest that the disciples were, in general, greatly perplexed and distressed because of this death of which now told them more clearly than He had ever so done before. Some have gone so far as to hold that perhaps the reason for the appearance of Moses and Elijah was in order to allay the doubts and fears of Jesus’ disciples. Here they would see for themselves Moses, the one whom God buried Himself. We are told in the Word, Deut. 34:5-7, So Moses the servant of Jehovah died there in the land of Moab, according to the word of Jehovah. And he [Jehovah] buried him in the valley in the land of Moab over against Beth-peor: but no man knoweth of his sepulchre unto this day. And Moses was a hundred and twenty years old when he died.

While Moses’ death was not a mystery, his burial certainly was, and is. But here on the ‘Mount of Transfiguration’ he is to be seen talking with Jesus before the disciples of Christ. Although they know not where his grave is, they know where he is at the present time; he is standing with Elijah before the Lord Jesus Christ. And the prophet, Elijah, he too is standing before Jesus conversing with Him. If indeed, these disciples were perplexed and distressed, surely this sight encouraged them. They were made aware that although Moses’ body had been buried by God, he was yet alive in Christ. They were made aware that when Elijah ascended in a chariot and horse, in flames of fire, yet he ascended to heaven, and here he is now, standing before the Lord of glory. If that sight did not encourage their hearts, pray tell what would? Does it not encourage our hearts to see these ‘famous’ witnesses of the truth standing in the presence of, and communing with Him who is ‘The Way, the Truth, and the Life’? He was always their Hope and Trust. And now they are with Him. He is our Hope and Trust, and we shall always be with Him. Whether buried as was Moses, or taken up when Christ comes for us—perhaps in a whirlwind into heaven—we shall always be with Him. Can we ask any more than that glorious and eternal blessedness—in the arms of Jesus?