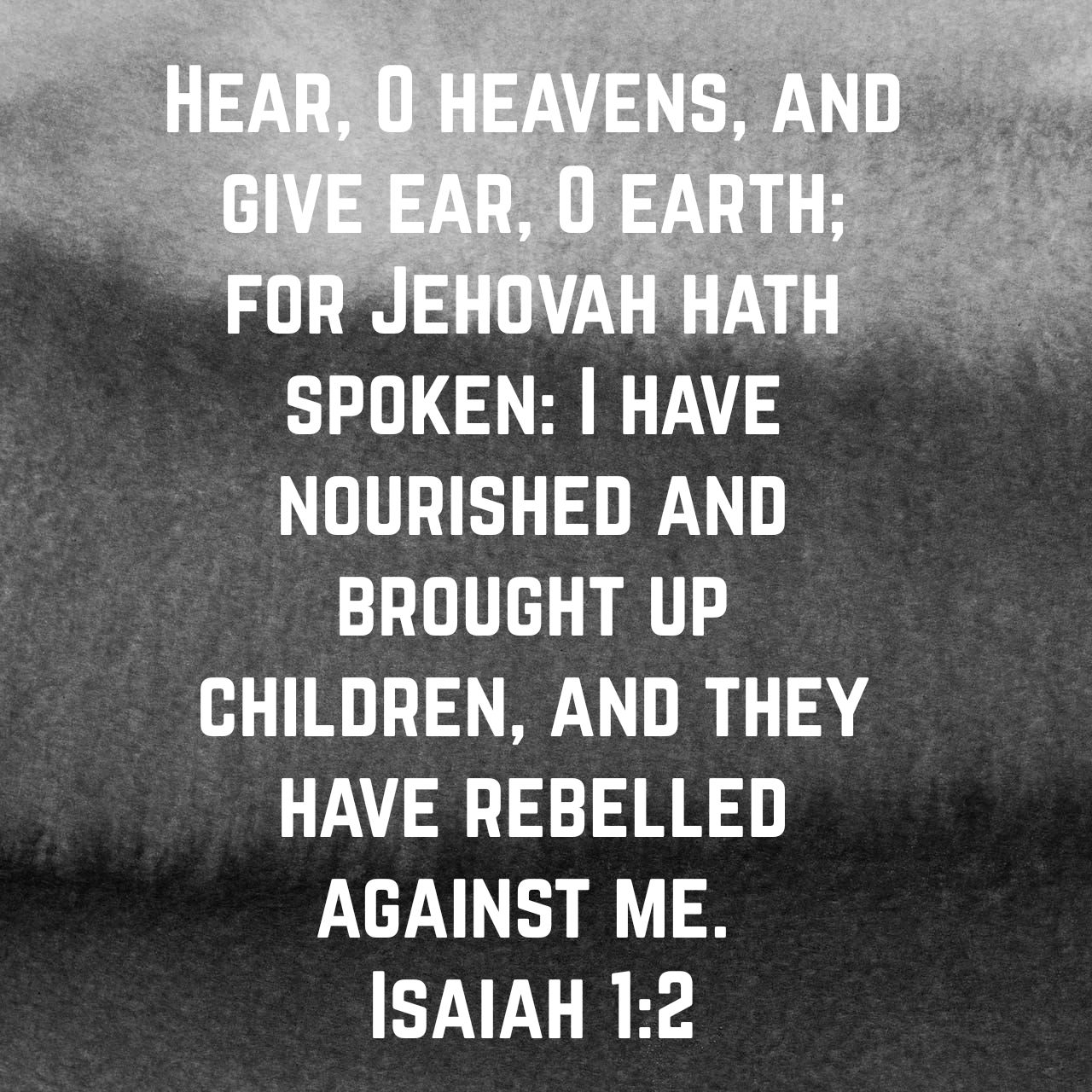 ‘I have nourished and brought up children, and they have rebelled against me.’

Empathy? Actually a very interesting matter; is it not? What is empathy; what does the word mean? A particularly ‘lightweight’ dictionary informs a seeker that empathy is an “ability to share in another’s emotions, thoughts, or feelings.” Another dictionary that had heretofore been imagined to be a more authoritative and serious wordbook, greatly disappointed when it was discovered that it not only did not provide a definition for ‘empathy,’ but the word was not even found in this no longer respected volume. Yet one more dictionary on this writer’s shelf is the ‘Oxford Universal Dictionary,’ which, it must be acknowledged, is an abridgment of the lengthier, and original, Oxford Dictionary—don’t be overly optimistic of yard sales—and, while it offers this word, empathy, with a definition, this provisional definition seems rather distant from what was anticipated. Nevertheless, here it is offered, for what it may be worth: “Empathy is, the power of projecting one’s personality into, and so fully understanding, the object of contemplation.” Well, when all else fails, go to the internet; right? Maybe! The internet gave us this final, concluding, unchallengeable, determination of the issue at hand. ‘Empathy is the ability to understand and share the feelings of another.’ How about that? Our first ‘lightweight’ dictionary agrees with the internet definition; and that definition can’t be wrong. After all, it was found on the internet.

In the passage under our consideration this week, we are led to wonder if we are being called to empathize with God as we have this terrible situation set before us, namely, that Jehovah complains that He has ‘nourished and brought up children, and they have rebelled against’ Him. Can we ‘understand and share the feelings of another’ when that Another is God Himself? Well, guess what; He has revealed in His Word exactly His ‘feelings’ about every matter that He has seen fit  to include in the wonderful revelation that He has given us, namely, the Holy Bible. We discover when we read His Word just what His wishes are, and not only so, but He has taught us that He wishes for His wishes to become our wishes. Has He not designed that we are, according to the apostle Paul, in Romans 8:29, to be conformed to the image of his Son; were we not even predestined to this end; this glorious conformation? If we can say with our Lord Jesus, Father…..not my will but thy will be done, we are then praying for that conformity.

It seems more than likely that our Father in heaven is condescending to us with this shocking reminder that, in spite of all the blessings and deliverances He had bestowed upon His covenant people, nonetheless they turned their backs on Him, choosing other gods, and other ways than His. Certain it is, as certain as there are so many parents, both fathers and mothers, that have experienced similar treatment from the children whom they have nourished and brought up, only to have them rebel against them when they reached that golden age of eighteen and all of a sudden discovered that they ‘knew it all.’ Was this not exposed in the very first family on the earth? Was it not rebellion, in some shape or form, that brought Cain to murder his brother, Abel? Perhaps this young rebel attempted to blame his parents for his own wickedness. It is true that his parents were the first sinners, but it would be more than difficult to show that they had taught him anything like the fratricide that he boldly committed, it seems, out of nowhere. Even as Jehovah provided everything that His people needed, even after delivering them from the bondage in Egypt, and bringing them into a land, flowing with milk and honey, they demanded a king ‘like the nations around them.’ They rebelled against their loving God, Jehovah. The God who, as a Father, nourished them and brought them up.

Surely, this should break the hearts of every believer who reads these expressions emitted by the sovereign God of the universe. This our God is indeed sovereign over all things, and yet we witness here in these words found in the ‘gospel of Isaiah,’ sounding in our ears to be as lamentable as the cries of many parents over their own rebellious sons and daughters. We would discover them crying out to themselves, and to their heavenly Father, ‘what did I do wrong?’ The reality may be that they did nothing wrong, although that is not necessarily always the case. But here we are reminded in Isaiah, chapter one, that the Father ‘in question’ is the Holy One of Israel; the absolutely Holy One. May anyone charge Him with wrongdoing? When He reminds His people, as recorded here in Isaiah, of His behavior regarding the matter, He reminds them that He has nourished and brought up children. He gave them everything they ever needed, and then some. A perfect example of this thought that the Lord, Jehovah, gave them all they ever asked for is found in the occasions where they cried unto Him for water, and He granted it to them. They cried unto Him for bread, and He granted that to them as well. The implication in those narratives is that they did not fully appreciate His goodness toward them. They complained about one thing or another; we remember their attitude about the manna from heaven, and their wanting to return to Egypt where they say they remember the ‘leeks and onions’ wishing to have them again rather than what their Father had provided.

Perhaps a prime example would be when they demanded a king like the nations around them hand. They brought their demand to Samuel, who immediately reported their demand unto Jehovah. Listen to what Jehovah of hosts response to His prophet was, in 1 Samuel 8:7-9,

And Jehovah said unto Samuel, Hearken unto the voice of the people in all that they say unto thee; for they have not rejected thee, but they have rejected me, that I should not be king over them. According to all the works which they have done since the day that I brought them up out of  Egypt even unto this day, in that they have forsaken me, and served other gods, so do they also unto thee. now therefore hearken unto their voice; howbeit thou shalt protest solemnly unto them, and shalt show them the manner of the king that shalt reign over them.

“I have nourished and brought up children, and they have rebelled against me.’ We may, whether any comfort can be drawn from it, see clearly that any parents that have experienced this sort of behavior from their children, are surely not original in this. They have Samuel before them, and of course, our Father in heaven well before Samuel. If God’s people—sadly including ourselves—have so rebelled against Him, why should it surprise that many children follow that pattern. They, like ourselves, have also been, brought forth in iniquity.’ Should it astound parents, in our day, that children should rebel against them, when God Himself solemnly avers that He has every reason to complain about His children, namely Israel have done so?

Ah sinful nation, a people laden with iniquity, a seed of evil-doers, children that deal corruptly! they have forsaken Jehovah, they have despised the Holy One of Israel, they are estranged and gone backward.

This Week’s Focus Passage: Luke 18:35ff. And he cried, saying, Jesus, thou son of David, have mercy