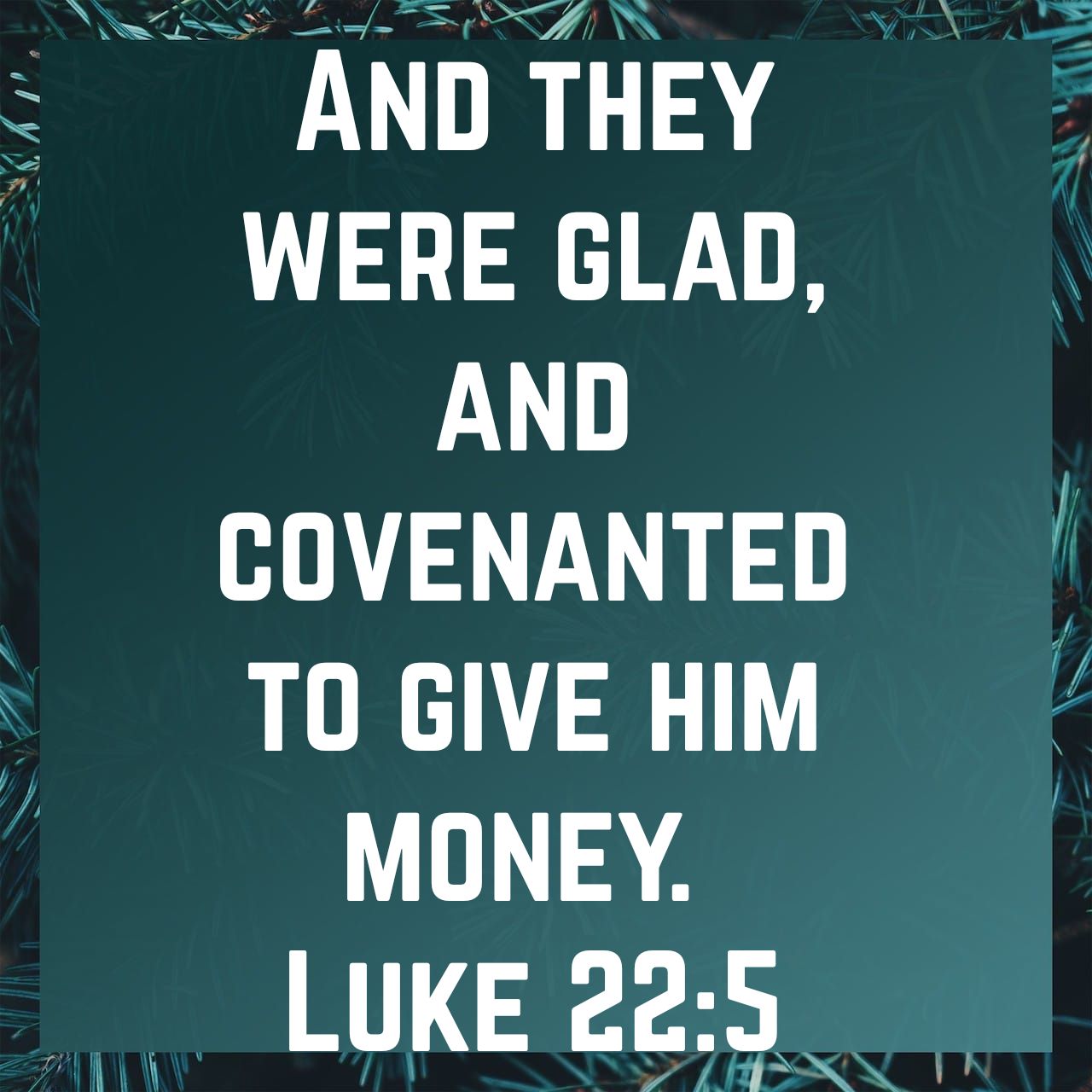 ‘And they were glad, and covenanted to give him money.’

We may read in Luke 22:14-20 of the institution of the Lord’s Supper, that memorable last supper that our Savior ate with His disciples before His passion. Luke has told us of this occasion, for the most part, in very similar language as did Matthew and Mark. Interestingly, one of the noticeable distinctions is that with regard to the cup. In the Matthean and in the Marcan accounts we are told that He said, this is my blood of the covenant. In the Lucan account under our consideration this week, Jesus said rather, This cup is the new covenant in my blood. The context in which this is found is verses 14-20:

And when the hour was come, he sat down, and the apostles with him. And he said unto them, with desire I have desired to eat this Passover with you before I suffer: for I say unto you, I shall not eat it, until it be fulfilled in the kingdom of God. And he received a cup, and when he had given thanks, he said, Take this, and divide it among yourselves: for I say unto you, I shall not drink from henceforth of the fruit of the vine, until the kingdom of God shall come. And he took bread, and when he had given thanks, he brake it, and gave to them, saying, This is my body which is given for you: this do in remembrance of me. And the cup in like manner after supper, saying, This cup is the new covenant in my blood, even that which is poured out for you.

Now it may seem, on the surface, to be a matter of some, great or small perhaps, indifference whether He has said in this discourse, ‘the covenant,’ or, ‘the new covenant.’ And frankly, we may come to discover that it is something of little, or no,  matter. But we should certainly, at the very least, examine the matter. It was soon discovered that there are differences among the English versions with regard to this difference. Indeed, A. T. Robertson, in his Word Pictures in the New Testament, explains for us that it is a ‘textual variation.’ In other words, every translator is not using the same Greek text to translate into English. There are textual variations. There are Nestle-Aland, Westcott and Hort, Textus Receptus. We have Greek New Testaments on our own shelf that vary on this issue. So let’s pass to another matter.

It is this; that even as the Jews were covenanting with Judas Iscariot to betray Jesus, our blessed Savior was, in the very same chapter, only separated by a few verses, in this gospel account, setting the table for His disciples to commemorate the impending event, the crucifixion of the Lord of glory at Golgotha. Jesus was advising His disciples, including Judas, as He raised the cup, that this cup was the New Covenant in His blood. Rather ironic, these two references to covenants clashing, as it were, in ths one chapter of Luke. Let us remind ourselves once again that the chapter divisions in our bibles are not inspired. They are man-made conveniences; albeit frequently found to be helpful, but nonetheless uninspired.

We might ask ourselves, ‘Did the true author of the Word of God, that is, God the Holy Spirit, intend for the reader to take note of this potential irony?’ Or did the human author; did Luke the beloved physician, set these two diametrically opposed covenants in such proximity as to draw our attention to possible irony? Well, we simply cannot say, can we? But it is ironic, especially when we view the situation from the perspective of the betrayer, Judas Iscariot. Let us bring out the context in which this narrative is to be found; it is in Luke 22:3-6:

And Satan entered into Judas who was called Iscariot, being of the number of the twelve. And he went away, and communed with the chief priests and captains, how he might deliver him unto them. And they were glad, and covenanted to give him money. And he consented, and sought opportunity to deliver him unto them in the absence of the multitude.

It is of importance to search for what the Greek word is behind this use of the verb, covenanted, before proceeding any further. Investigation discloses that the Greek word is, in fact, suntithemi, which Vine’s Expository Dictionary defines for us, to mean, “lit., to put together. is used only in the Middle Voice [neither active nor passive] in the N.T., and, means to determine, agree, John 9:22 and Acts 23:20; to assent, Acts 24:9; to covenant, Luke 22:5.” We see then that there is more than one option in the choice of translation. In fact, many of the versions consulted have chosen other options than ‘covenanted.’ Some of the options, determined upon by other English translations, are ‘agreed,’ ‘engaged,’ ‘pledged,’ and ‘promised.’ ‘Agreed,’ and, ‘promised,’ were the more frequently chosen against ‘covenanted.’ Are they not virtually synonyms? Indeed, may not a covenant be thought of as an agreement? Or a promise, Or a pledge, for that matter? The chief priests and captains agreed, promised, or pledged to give Judas money in exchange for his agreeing, promising, pledging, to deliver Jesus Christ unto them ‘in the absence of the multitude.’ They covenanted, they agreed, they pledged, they promised each other.

And what is ‘the New Covenant in my blood’ of which Christ had spoken in verse 20 of this same chapter? That may be determined by Jeremiah 31:31-34;

For I will forgive their iniquity, and their sin will I remember no more.

Maybe it is just me, but is it not extraordinary; is it not amazing to witness in our bibles this coincidence whereby we see this wickedness on the part of both Judas and these chiefs and captains, conspiring, that is, covenanting to bring about the death of the Son of God only hours before He institutes the means by which He would have us to remember His loving death; His dying love, for us. This is the New Covenant in my blood, He said with reference to the symbol of the blood of the New Covenant not many hours later. He would actually ratify that New Covenant with His blood. Perhaps Judas recognized the incredible ‘irony’ between his covenanting with those who sought the death of the Savior of the World, and the ratification of the blessed and eternal New Covenant of Grace in the blood of the King of Glory; blood that he himself had conspired to shed. That would be enough to lead one to hang himself.

2 Timothy 1:16 ‘The Lord grant mercy to the house of Onesiphorus.’