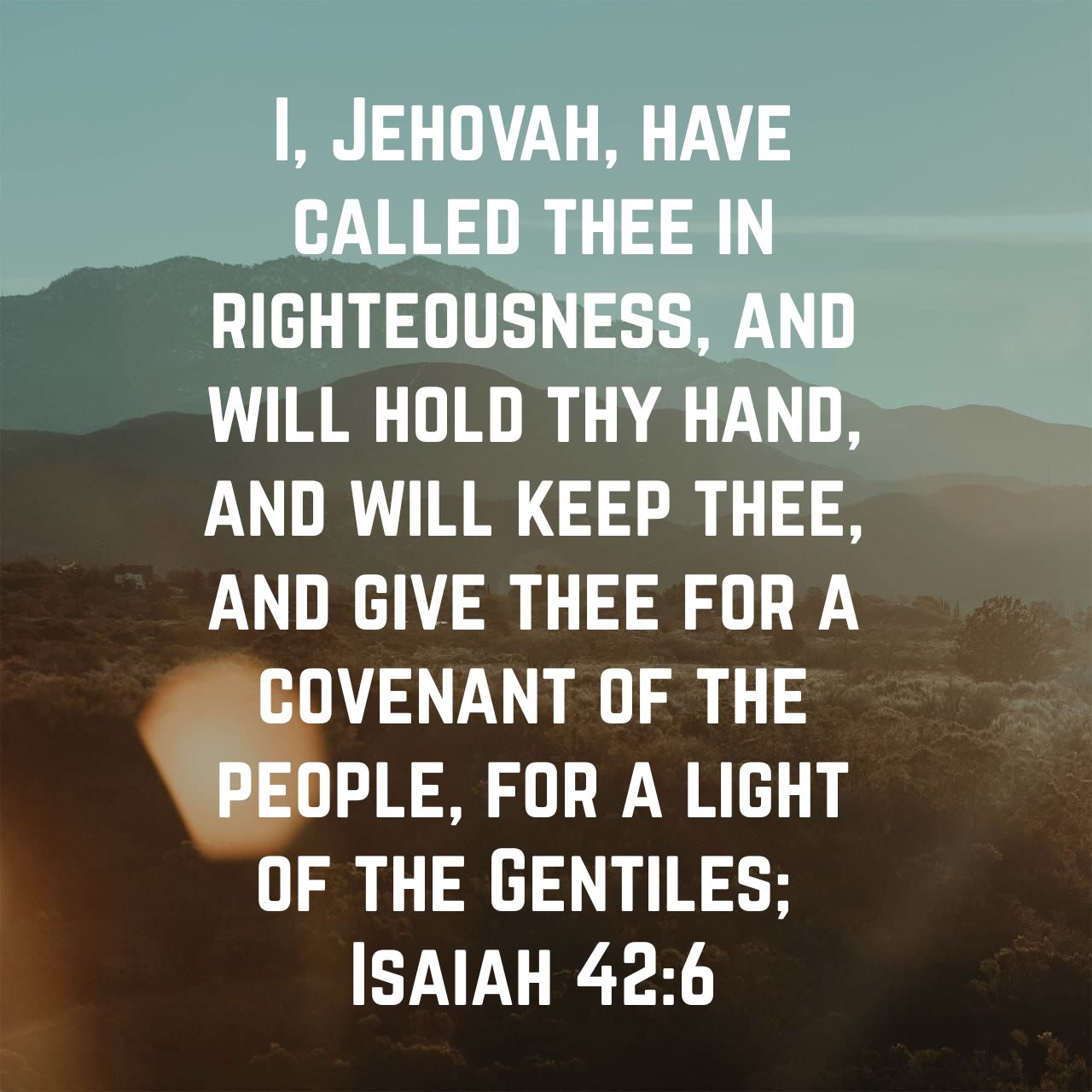 ‘I…will give thee for a covenant of the people.’

The important context of the statement chosen for this week’s focus passage is found in verses 6-7, which are more than worthy of being reproduced below:

I, Jehovah, have called thee in righteousness, and will hold thy hand, and will keep thee, and give thee for a covenant of the people, for a light of the Gentiles; to open the blind eyes, to bring out the prisoners from the dungeon, and them that sit in darkness out of the prison-house.

After the birth of their son in Beth-lehem, as we are informed by Luke, that according to the law of Moses, and the custom of the Jews; we are told that, when they had satisfied the days of her purification, the purification of the mother, they brought their child to Jerusalem to present him to the Lord. According to the law of the Lord (Leviticus 12:6ff.), they were to bring a sacrifice according to their means, in their case it was ‘a pair of turtle-doves or two young pigeons.’ When they had arrived, we are further informed, they met a man in Jerusalem, by the name of Simeon. Beyond his name, we receive only the information that he is one who was righteous and devout, looking for the consolation of Israel: and the Holy Spirit was upon him. In point of fact, the Holy Spirit had made it known to him that he should not die until a particular event had transpired. Specifically, he was told that ‘he should not see death, before he had seen the Lord’s Christ.’ This man, Simeon, who had come ‘in the Spirit,’ received the child, Jesus, into his arms, blessed his God, and proceeded to utter the following statement (Luke 3:29-32):

Now lettest thou thy servant depart, Lord, according to thy word, in peace; for mine eyes have seen thy salvation, which thou hast prepared before the face of all peoples; a light for revelation to the Gentiles, and the glory of thy people Israel.

Our focus passage this week speaks of our Lord Jesus Christ. There is little, if any, question with regard to this reality before us. Old Simeon, faithful servant of the Lord, in his response to Jehovah’s fulfillment of His promise that he would not see death before he had seen the Lord’s Christ, uses the very same language that the prophet employed in Isaiah 42:6-7, respecting the promised covenant to have regard to a light for revelation to the Gentiles, and the glory of thy people Israel. There is an interesting distinction in one point of the language, or words, used by Isaiah, and those of Simeon. It is this. While Isaiah seems to refer to the gift Jehovah is promising to grant; he adds substance after substance to the promise made. This promise seems clearly to refer to an Individual Person; One that Jehovah may call in righteousness; One whose hand Jehovah may hold; One whom He may keep, and to top it all off, One whom Jehovah may give for a covenant of the people, for a light of the Gentiles; to open the blind eyes, to bring out the prisoners from the dungeon, and them that sit in darkness out of the prison-house. Jesus Christ Himself has been given; He is Himself the covenant promised here in Isaiah 42. He is the One promised from the very beginning. Indeed, He is the One spoken of in Genesis 3:15, that which is spoken of, by many, as the ‘proto-evangelicum,’ that is, the first proclamation of the gospel of Jesus Christ. This is, indeed, the first pronouncement of that good news which God has declared for the salvation of His people from their sins, when God spoke these words to the serpent that had beguiled Adam and Eve. God said to this serpent what may reasonably be referred to as promise. As we read these words, can we not hear God making this promise to the serpent? We are tempted to imagine our God Almighty asking the serpent, ‘Do you want to hear the good news first or the bad news? Nevertheless; this is that ‘proto-evangelicum.’

Because thou hast done this, cursed art thou above all cattle, and above every beast of the field; upon thy belly shalt thou go, and dust shalt thou eat all the days of thy life: and I will put enmity between thee and the woman, and between thy seed and her seed: he shall bruise thy head, and thou shalt bruise his heel.

A promise is a covenant; a covenant is a promise. And when we are thinking of a promise given by the Father of Truth, surely we may say emphatically, A PROMISE IS A PROMISE. There was a time in human history when a promise made from man to man was sufficient; a definite deal was ratified with a promise. At some time in the history of mankind, a token was added to such a promise; in our day, and in our society, a handshake once sealed the deal. Sadly, that is no longer the case. In point of fact, in our day, even a signed and sealed promise is easily broken; there are vast arrays of attorneys that will happily make that breach happen.

But the promise of which we speak; the covenant of which Isaiah, and others, spoke is never to be broken by God; yea, He has promised; and He is the Faithful One. The author of the book of Hebrews has written of this matter in chapter six, verses 13-17. In that lovely passage, we are advised that:

For when God made promise to Abraham, since he could swear by none greater, he sware by himself, saying, surely blessing I will bless thee, and multiplying I will multiply thee. And thus having patiently endured, he obtained the promise. For men sware by the greater: and in every dispute of theirs the oath is final for confirmation. Wherein God, being minded to show more abundantly unto the heirs of the promise the immutability of his counsel, interposed with an oath.

These words made use of by the writer/preacher of the book of Hebrews, namely the words, ‘promise’ and ‘oath’ are synonymous in this context, and speak of that which the apostle, Paul, had reference to in his epistle to the church in Galatia. He wrote, in 3:16-17, conflating the terms, promise and covenant, when he wrote:

Now to Abraham were the promises spoken, and to his seed. He saith not, and to seeds, as of many; but as of one, and to thy seed, which is Christ. Now this I say: a covenant confirmed beforehand by God, the law, which came four hundred and thirty years after, does not disannul, so as to make the promise of none effect.

Here, in this New Testament epistle, we have another instance of conflation; the bringing alongside, as it were, of the terms, ‘covenant,’ with, ‘promise.’ The promise of the Seed of the woman, that same Seed of which Isaiah has spoken in Isaiah 9:6;

For unto us a child is born, unto us a son is given; and the govern-ment shall be upon his shoulder: and his name shall be called Wonderful, Counsellor, Mighty God, Everlasting Father, Prince of Peace.

Again, in this place, we recognize the concept of Him being a gift; that is, given as in our focus verse, I will give thee for a covenant, and here, a son is given. Certainly, this correlates extremely will with John, the Evangelist’s, best known statement of Truth, for God so loved the world, that he gave his only begotten Son, that whosoever believeth on him should not perish but have eternal life. Amen and Amen.

2 Timothy 1:16 ‘The Lord grant mercy to the house of Onesiphorus.’