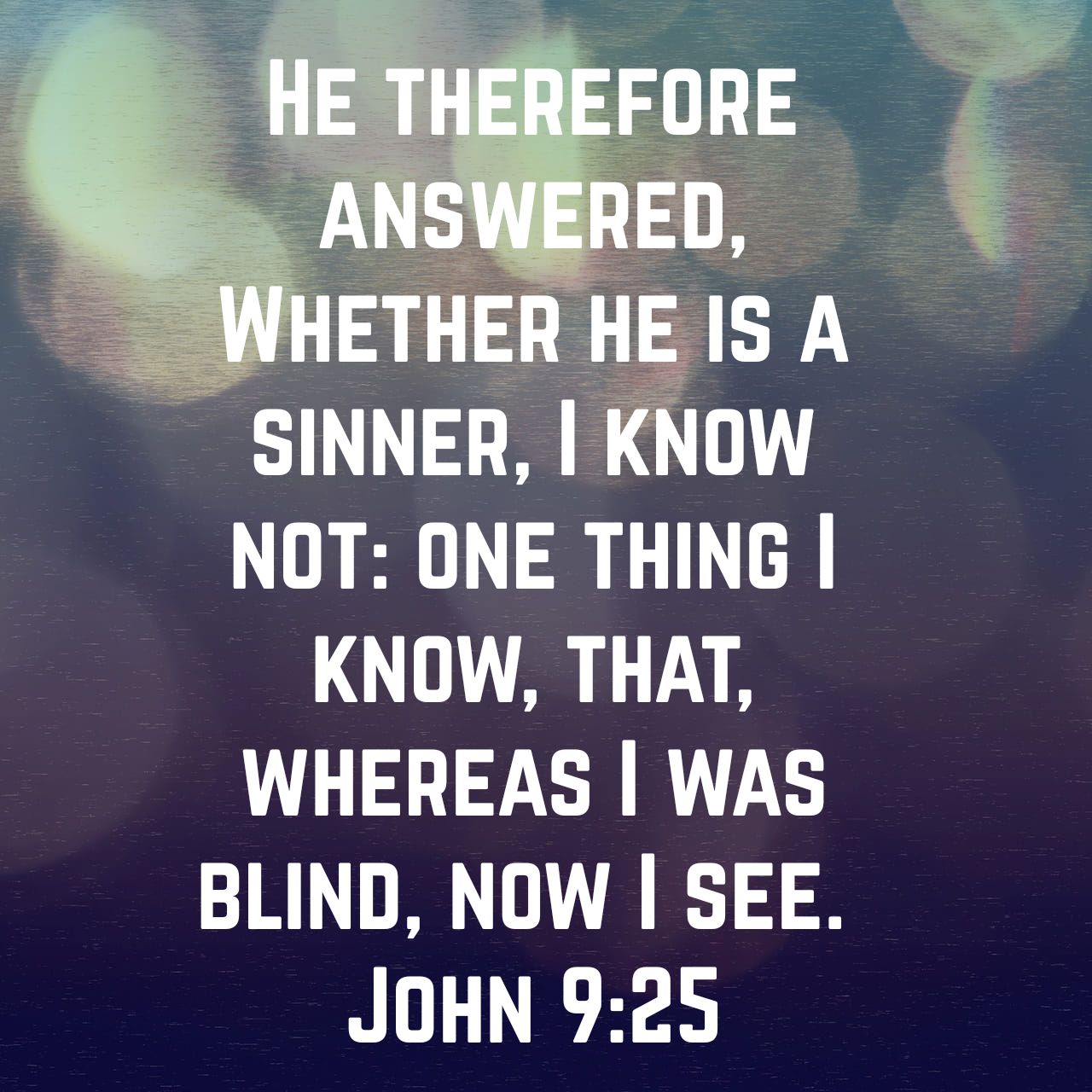 ‘One thing I know, that, whereas I was blind, now I see.’

And as he passed by, he saw a man blind from his birth. And his disciples asked him, saying, Rabbi, who sinned, this man, or his parents, that he should be born blind? Jesus answered, neither did this man sin, nor his parents: but that the works of God should be made manifest in him. We must work the works of him that sent me, while it is day: the night cometh when no man can work. When I am in the world, I am the light of the world. When he had thus spoken, he spat on the ground, and made clay of the spittle, and anointed his eyes with the clay, and said unto him, Go, wash in the pool in the pool of Siloam (Which is by interpretation, Sent). He went away therefore, and washed, and came seeing.

The first question, and a rather startling one actually, coming from the lips of Jesus’ disciples, conspicuously insinuates that they imagine a connection between physical infirmity and sin. Who sinned that this man should be born blind? Did he sin or did his parents sin? Whose fault was it that he was born blind? That sort of rationale would require people to inquire about those upon whom the tower of Siloam fell killing them, and also in that same context, in Luke 13, we would have to assume that those slain by Pilate, whose blood Pilate mingled with their sacrifices, were sinners worse than most. Was that not what was behind the interrogatory of Christ at that time? Did He not ask His auditory, I tell you, Nay: but except ye repent, ye shall all likewise perish. Do we ever find in the Word of God, any evidence, or even suspicion, that there is a connection, or link of any sort, between such natural calamities and sin? Would that not bring into question multiple individuals whether some sin was responsible for their particular affliction. Think of the woman with an issue of blood for more than twelve years; was there any question raised as to what sin she was guilty of that brought that infirmity upon her? Or in the Older Testament, was Naaman’s leprosy ever denounced as the result of some specific sin on his part? When Christ frequently told recipients of His marvelous healings, ‘Go, and sin no more,’ was that meant to imply that sin was the root cause of their affliction; I think not. We don’t know where the disciples of Jesus came up with this notion, but they surely did not learn it, or get it, from the Christ.

Consider how many blind there were in the gospels to whom Christ was pleased to give sight, beside this man born blind, and reported in John 9. There is the case set forward in Matthew 15:29-31 where Jesus was engaged in what we might call, a ‘healing tour,’ and we intersect that ‘tour’ to report the following matters:

And Jesus departed thence, and came nigh unto the sea of Galilee; and he went up into the mountain, and sat there. And there came unto him great multitudes, having with them the lame, blind, dumb, maimed, and many others, and they cast them down at his feet; and he healed them: insomuch that the multitude wondered, when they saw the dumb speaking, the maimed whole, and the lame walking, and the blind seeing: and they glorified the God of Israel.

Nowhere is there any consideration whatever given from any corner, or from any persons, about what great sins these individuals had been guilty of that brought upon them such things as blindness, dumbness, lameness, and many other catastrophes of like, or similar nature. In the context of the discussion this blind man who had been given sight by Jesus, and who was subsequently being interrogated by a number of Pharisees, it is most astounding that when these self-righteous men could not discover, to their satisfaction, what had transpired whereby this man received his sight, they concluded at the last, as may be found and read from verse thirty-four;

They answered and said unto him, Thou wast altogether born in sins, and dost thou teach us? And they cast him out.

This was strongly suggested by the Evangelist as the reason the parents of the man born blind did not wish to answer the Pharisees; they feared being excommunicated. Now it is demonstrated that their fear was well-placed, for this is precisely what was done to their son. And they cast him out; he was summarily excommunicated. These evidences of self-righteous self-deception are made conspicuous at the close of this ninth chapter of John, when these men are confronted by our Savior about what they did to this former blind man; beginning in the verse immediately following the last one that we cited, we may read the conclusion of the matter, or ‘the rest of the story.’

Jesus heard that they had cast him out; and finding him, he said, Dost thou believe on the Son of God? He answered and said, And who is he, Lord, that I may believe on him? Jesus said unto him, Thou hast both seen him, and he it is that speaketh with thee. And he said, Lord, I believe. And he worshipped him. And Jesus said, For judgment came I into this world, that they that see not may see; and that they that see may become blind. Those of the Pharisees who were with him heard these things, and said unto him, Are we also blind? Jesus said unto them, If ye were blind, ye would have no sin: but now ye say, We see: your sin remaineth.

This is remarkable. We began with the question raised by Christ’s disciples as to what sin this man had committed in order that he would be born blind. Or were his parents, perhaps, guilty of some terribly wicked sin that was being punished by their son being blind from his birth. The answer supplied in, and by, the context which followed is ironic, to say the least. Not only is the question, “Rabbi, who sinned, this man, or his parents, that he should be born blind? Jesus answered, Neither did this man sin, nor his parents: but that the works of God should be made manifest in him. We must work the works of him that sent me, while it is day: the night cometh, when no man can work. When I am in the world, I am the light of the world.”

The irony is that, at the conclusion of the matter, we find Jesus informing these Pharisees, that, if ye were blind, ye would have no sin; but now ye say, We see: your sin remaineth. The one that was blind was thought, initially by the disciples, to be guilty of some terrible sin, but he was not. The ones [the Pharisees] that assumed they could see very well, were the sinners that were truly blind.

This Week’s Focus Passage: Jeremiah 6:16 ‘But they said, we will not walk therein.’

This Week’s Focus Passage: James 1:18 ‘Of his own will he brought us forth by the word of truth.’

This Week’s Focus Passage: Luke 24:27 ‘He interpreted to them in all the Scriptures the things conce