Matthew 11:12 ‘The Kingdom of Heaven suffereth violence, and men of violence take it by force.’ 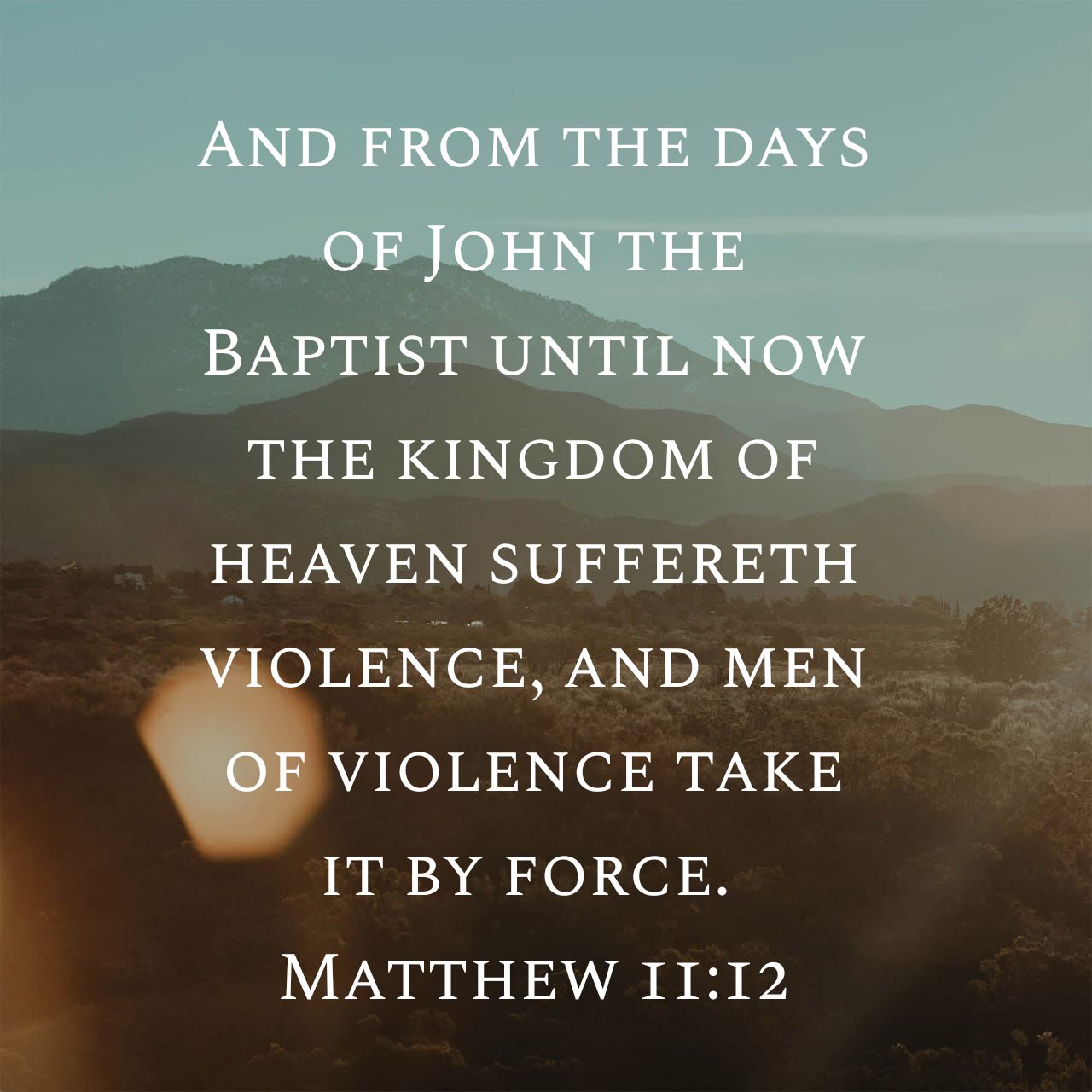 ‘The Kingdom of Heaven suffereth violence, and men of violence take it by force.’

In John Bunyan’s famous allegory, The Pilgrim’s Progress, the reader discovers early in the travels of Christian, the Pilgrim, that he arrives at the house of the Interpreter. At one point in his travels, he encounters a grave person who name we are told is Good-Will. This person, Good-Will directs our Pilgrim to the house of the Interpreter, where he is shown excellent things. These excellent things are explained to him by Interpreter. Our Dreamer, as Bunyan has typified himself, after witnessing a remarkable number of activities set before him, and being given understanding of much, proceeded on this tour, following every direction of the Interpreter, leading up to the following description, which our Dreamer continues to relate: “I saw also, that the Interpreter took him again by the hand, and led him into a pleasant place, where was builded a stately Palace, beautiful to behold; at the sight of which, Christian was greatly delighted; he saw also upon the top thereof certain persons walking, who were clothed all in Gold. Then said Christian, May we go in thither? Then the Interpreter took him and led him up toward the Door of the Palace; and behold, at the Door stood a great Company of men, desirous to go in, but durst not. There also sat a man at a little distance from the door, at a table side, with a book, and his inkhorn before him, to take the name of him that should enter therein: He saw also, that in the doorway stood many men in armor to keep it, being resolved to do to the men that would enter, what hurt and mischief they could. Now was Christian somewhat in a maze: At last, when every man started back for fear of the armed men, Christian saw a man of very stout countenance, come up to the man that sat there to write, saying, Set down my name, Sir; the which when he had done, he saw the man draw his Sword, and put an Helmet upon his head, and rush toward the Door upon the armed men, who laid upon him with deadly force: But the man, not at all discouraged, fell to cutting and hacking most fiercely. So after he had received and given many wounds to those that attempted to keep him out, he cut his way through them all, and pressed forward into the Palace; at which there was a pleasant voice heard from those that were within, even of those that walked upon the top of the Palace, saying, Come in, Come in; Eternal glory thou shalt win. So he went in, and was clothed with such garments as they. Then, Christian smiled, and said, I think verily I know the meaning of this.”

It is the most popular opinion of those writing upon Bunyan’s famous work, that this personage—this allegorical description—is taken from Christ’s remarks to His disciples in Matthew 11:11-13; Verily I say unto you, Among them that are born of women there hath not arisen a greater than John the Baptist: yet he that is little in the kingdom of heaven is greater than he. And from the days of John the Baptist until now the kingdom of heaven suffereth violence, and men of violence take it by force. For all the prophets and the law prophesied until John. Indeed, just what did Jesus intend by  hese remarks; this warning, if you will? Is violence required in order to the taking of the kingdom of heaven? Must it be taken by force? Consider all the language of the violence that Christ experienced in ‘taking the kingdom.’ Does Isaiah’s prophetic chapter 53 not conspicuously sets it right before us, from 52:14, His visage was so marred more than any man, and His form more than the sons of men. He was wounded, He was bruised; we are healed by the stripes that He suffered. He poured out His soul unto death. The Gospel narratives confirm the brutality of these forecasted events.

There is no ‘formula’ with regard to secondary experiences in being brought into the kingdom of our Lord Jesus Christ. God has determined to bring these particulars upon each of His elect children according as He sees fit for them. Not every one has a ‘Damascus Road’ experience such as that of Saul of Tarsus in his becoming the apostle Paul; an eminent stalwart of the faith of Jesus Christ. Some are called to the suffering of the proto-martyr Stephen, others to lesser physical strain, according as God sees their faith can sustain. Every one of God’s chosen is under the ‘prescription’ spoken of by Paul in his epistles. That blessed prescription is found in 2 Corinthians 12:7-8, where we read of Paul being given a ‘thorn in the flesh.’ We are not told exactly of what that thorn consisted, but we are told that Paul besought the Lord thrice, that it might be taken away. The answer God gave to his prayers is this ‘prescription’ of which we speak. My grace is sufficient for thee. May we be given the grace to respond as did this Apostle to the Gentiles. He went on to write, Most gladly therefore will I glory in my weaknesses, that the power of Christ may rest upon me. Wherefore I take pleasure in weaknesses, in injuries, in necessities, in persecutions, in distresses, for Christ’s sake; for when I am weak, then am I strong.—2 Corinthians 12:9-10.

Our Father in heaven will give no more than we can bear. He has appointed everything that comes to us, even as in the case of his servant, Job. He does not leave us in our weakness, but makes us strong through His grace. Yes, there is a warfare appointed to the saints, but He has given to us weapons for our warfare. Yea, He has given to us the whole armor of God. He has given us ‘grace upon grace.’ Why would He have provided all that which we require for warfare if there was to be no warfare? There is a specious teaching afoot that would have men believe that all we must do is to ‘accept Jesus as our own personal Savior’ and all will be well. This teaching has been around, in one form or another, since the beginning of time. It denies the necessity of repentance and obedience. It denies the requirement of accepting Jesus as Lord. It claims that to teach any need of having Jesus to be our Lord and the concomitant requirement of ‘following the Lamb whithersoever he leadeth’ is disparaging to the grace of God. It has been called by many names over the centuries, most lately perhaps, it is called anti-Lordship salvation.

It is a near relative of Arminianism; that understanding that propounds a synergistic gospel rather that the true monergistic gospel recorded in the Scriptures. It often is disclosed in the altar calls of the many supposedly Bible-believing churches that pronounce that ‘God has done all that He can do; He has sent His Son to die for your sins and provided forgiveness to sinners,’ ‘now the rest is up to you.’ They call upon mankind to take that final and last step; Christ has died for sinners, but you must add to His work by accepting His work; evidently, He was wrong when He cried out, ‘It is finished.’ You must yet confirm His work by your work of coming forward and asking Jesus to come into your heart. This is blatant synergism making man a contributor; adding his own work to the work of Jesus Christ. Paul has said that there is One Mediator between God and man, and it is not you; not even in part. God has sent His Son; His Son has satisfied the justice of God through His own Blood; God the Holy Spirit applies the finished work to every chosen vessel of salvation through His regenerating grace, making them willing to come to God through faith in the Lord Jesus Christ. Yes, when we are made willing to come, it may be as John Newton averred, ‘Though many dangers, toils, and snares,’ but God has promised to ever be with us. He has spoken through Isaiah these blessed promises, in Isaiah 43; Fear not, for I have redeemed thee; I have called thee by thy name, thou art mine. When thou passest through the waters, I will be with thee; and through the rivers, they shall not overflow thee: when thou walkest through the fire, thou shalt not be burned, neither shall the flame kindle upon thee. For I am Jehovah thy God, the Holy One of Israel, thy Savior.