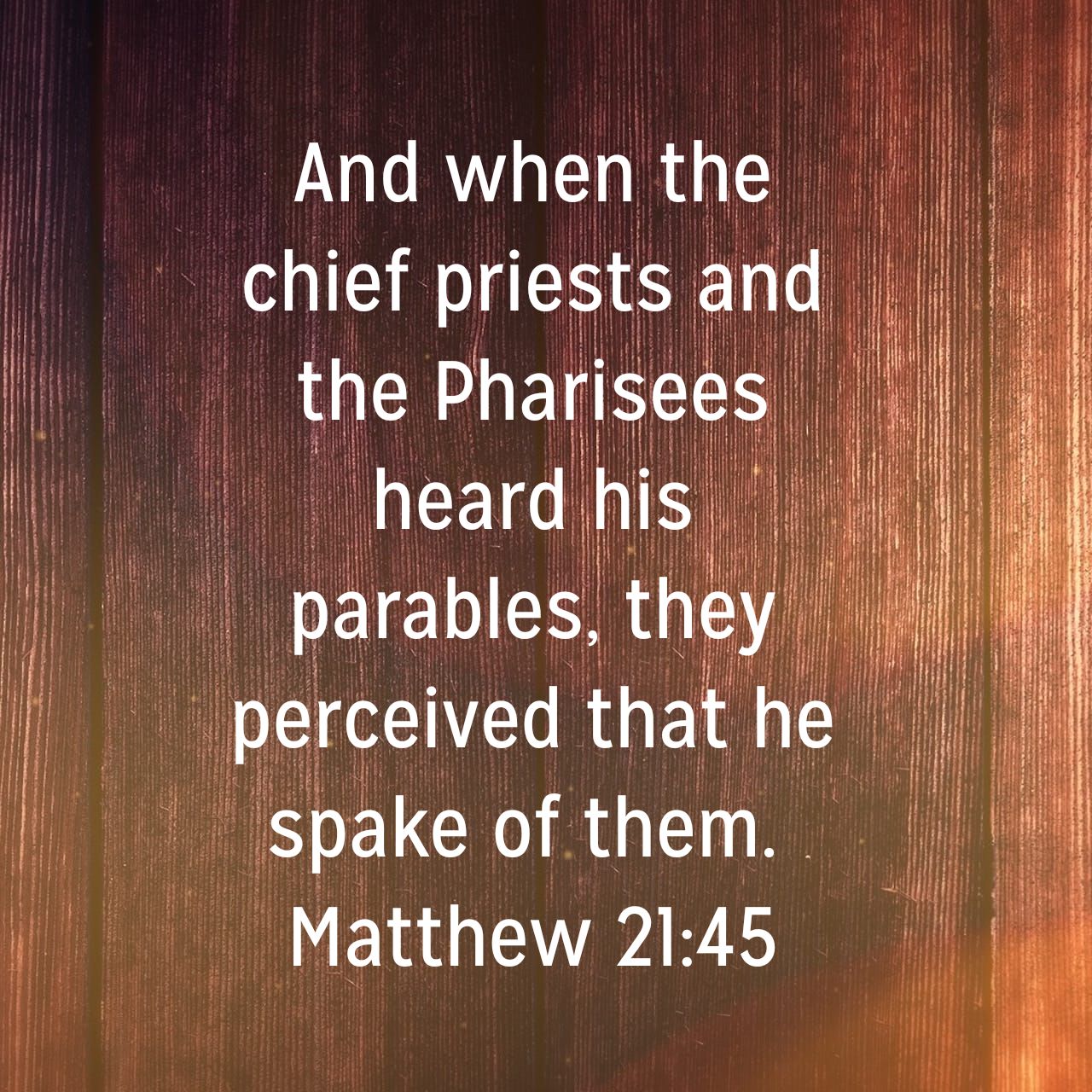 “They perceived that he spake of them; they plainly saw that they were designed by the son that promised to go into the vineyard, but did not; only talked of works, but did not do them: and that they were the husbandmen that acted the ungrateful part to the householder, and the cruel one to his servants, and would to his son, their own consciences told them they were the men. They knew that the whole was levelled against them, and designed for them, and exactly fit their case.”—Gill’s Commentary.

Christ has just uttered these two parables in the hearing of a number of the chief priests and the Pharisees. And even when He then inquired of these that heard  His parables, and particularly the second parable of ‘The wicked husbandmen,’ and the question being propounded, ‘what will the lord of the vineyard do unto those husbandmen?’, they consented that the lord ‘will miserably destroy those miserable men.’ Is it not passing strange that they made this judgment upon themselves when we read next that ‘they perceived that he spake of them?’ If they understood that they were, indeed, typified by the wicked husbandmen; is it not beyond amazing that their pronounced judgment would be so harshly punitive? Are we to understand from this that they recognized how wicked their behavior was? May we infer that they then believed that their own wickedness should grant that they were ‘miserable men who should be miserably destroyed’? And if this were the case with them, would we not anticipate that it ‘put the fear of God in them?’ Yet, what of their response? What do we see and hear them doing? And when they sought to lay hold on him, they feared the multitudes, because they took him for a prophet. It powerfully appears that there was no fear of God in them, but only a fear of the multitudes; a fear of man. Truly, we may say of them as Paul has written in his letter to the Romans (3:18), citing the words of Psalm 36:1, There is no fear of God before their eyes. Before their eyes? Here was the living God; the Son of God; the Messiah, before their eyes, and what did they wish to do? They desired His death. They determined to take His life. How manifestly true the words of the apostle John, in his gospel, and 1:11, He came unto his own, and they that were his own received him not. Total Depravity demonstrated among such ‘religious leaders,’ pretenders to be those looking for Messiah. How many among us, in our day, cannot see Jesus though they may read their Bibles, though they may be regular attendees at Christian worship services, are nonetheless blind, of whom it must be said, as Christ spoke in another place, saying, If ye were blind, ye would have no sin: but now ye say, We see: your sin remaineth. (Jn. 9:41).

Even as David, unwittingly, pronounced his sentence upon himself when he declared to Nathan, after the prophet had set before the king, an account of two men in one city, the one rich and the other poor. While the rich man had many sheep, the poor man had only one little ewe lamb, who was unto him as a daughter. The rich man was desirous to entertain a traveler coming unto him, and rather than take from among the many sheep in his flocks, he took the poor man’s lamb and dressed it for the man that was come to him. Nathan spoke this ‘parable’ to David, whose wrath was stirred up by the tale to the point that his anger was greatly kindled so that he retorted to Nathan, the man that hath done this is worthy to die; and shall restore the lamb fourfold. This judgment was according to the law pronounced in Exodus 22:1, four sheep for a sheep. Little did David know that he had pronounced this judgment upon himself. Yet it came to pass that the child of adultery was stricken and died soon thereafter; subsequently Amnon was slain by his half-brother, Absalom, for his wickedness with Absalom’s sister, Tamar. And upon the rebellion of Absalom, seeking his own father’s throne, he was slain by Joab, David’s captain. That amount to three sons of David dying from the chastening hand of God. A fourth son, Adonijah, while his father lay upon his death-bed, conspired, in Absalom-like fashion, to take the throne to himself though it was known that Solomon was God’s choice to succeed David. Adonijah brought upon himself judgment of Solomon through the sword of his chief attendant, Benaiah.

Well could it be inquired, did not Adonijah realize that such obvious perfidy would not go unnoticed? Surely, we are warranted to expect that he would recognize the conspicuous imitation of Absalom’s rebellious behavior and it would, as it did unto Absalom, result in this execution. But here we are looking at the culmination of David’s sentence upon the rich man of Nathan’s entrapping parable. David indeed paid fourfold; the child of adultery; Amnon; Absalom; and then, Adonijah. How this reality must have brought David to tears again and again as it played out in real-time.

We may wonder at David being so easily deceived by Nathan’s parable which brought him to the place where he sentenced himself. We may wonder also at the folly of Adonijah imagining that he could imitate Absalom and get away with it. O the folly of man! But is this not really the case with these chief priests and Pharisees who even knew, we are told, that Jesus was speaking of them. Yet they charged ahead with their design to eventually apprehend the Son of God and crucify Him on Golgotha’s cross. Do we not, sadly, witness this among friends, associates, and even relatives whom we love as ‘kinsmen according to the flesh’? These, in the deep recesses of their hearts and minds know that they are among the multitude of the souls of mankind that are spoken of in the Bible, as the enemies of God. They know intellectually that they have been created by the Creator of the whole earth, and all things that dwell therein; they know that God has commanded them to repent or perish, and yet they continue to go on their way ignoring the signs of the heavens; the unspoken, perhaps, testimonies of friends and relatives; children of the living God, that in their very lives and practices demonstrate this demand upon all mankind to ‘repent and believe’ the Gospel. These Pharisees of Matthew 21, understood that Jesus was speaking of them, yet they would not repent, but went on as they were.