Psalm 110 ‘Jehovah saith unto my Lord, Sit thou at my right hand.’ 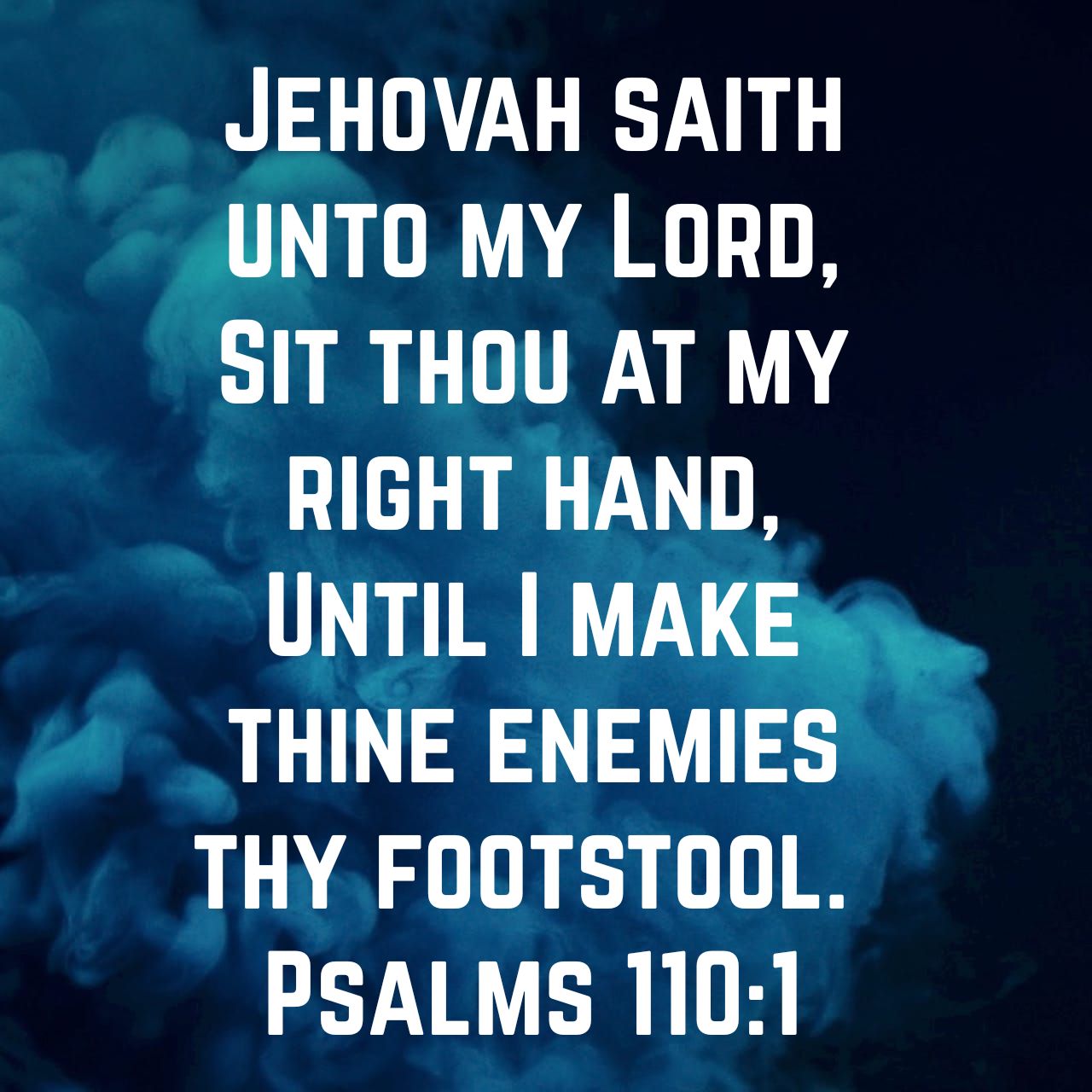 ‘Jehovah saith unto my Lord, Sit thou at my right hand.’

Most writers seem to be in agreement with one another, that Psalm 110 is the most frequently quoted, or cited, passage from the Older Testament found in the books of the Newer Testament. Moreover, there is also agreement with regard to which is the most frequently cited verse from the Older Testament, and that being the very first verse of this 110th psalm. Some among us may be willing to admit that the author of this glorious psalm is the shepherd/king of Israel, David, the son of Jesse, according to the superscription given A Psalm of David, which superscription we, and many others, hold to be inspired. However, the authorship need not suffer under that particular dispute. For we have the support of our Lord Jesus Christ Himself to this fact. Matthew has recorded, under inspiration, the words of Christ:

Now while the Pharisees were gathered together, Jesus asked them a question, saying, What think ye of the Christ? whose son is he? They say unto him, The son of David. He saith unto them, How then doth David, in the Spirit call him Lord, saying, The Lord said unto my Lord, Sit thou on my right hand, Till I put thine enemies underneath thy feet?-Mt. 22:41-44.

Jesus Christ, the Son of God, the Son of David, has spoken; and He has said clearly that David is the author of the words of the 110th Psalm. Moreover, He has, more than that, informed His hearers that David was in the Spirit, when he wrote the psalm.

These words of David, in Psalm 110, are the words of God the Holy Spirit. We must submit to His truth; He who is Truth incarnate Himself, as He declared elsewhere as He famously spoke to Thomas, in John 14:6; I am the Way, and the Truth, and the Life. He attests, of course, the inspiration of the entire Psalm, and we might equally say, the inspiration of the Psalms and their superscriptions. Jesus’ statement is even more emphatic in Mark’s account. David himself said in the Holy Spirit; 12:36.

So that we may embrace here, not only the sovereign, inspired witness to the truth of David’s words in this blessed psalm regarding the fact of inspiration, but also in the remarkable content of the Psalm, to have set before us, the Messiah King who is also a Priest after the order of Melchizedek. This Priestly King spoken of by David is the same One to which Zechariah referred in his prophecy, in Zechariah 6:13. Speaking of the Branch, that is, with a capital B, Zechariah went on to say of Him, even he shall build the temple of Jehovah; and he shall bear the glory, and shall sit and rule upon his throne; and he shall be a priest upon his throne; and the counsel of peace shall be between them both. This Branch shall be King and Priest. Zechariah points to Him as King and as Priest, while Moses pointed to Him as the prophet—like unto me, Moses said—shall God raise up from among your brethren. This which Moses foretold in his fifth book of the Pentateuch, that of Deuteronomy.

David, quite apparently, was given more understanding than many, over the years, even many centuries, are usually willing to ascribe unto him. At the very least, as he was led by the Holy Spirit according to Jesus, he had some recognition that his promised Seed, namely my Lord, was to proceed from his own bowels. Did David realize that the promise given him, as recorded for us in 2 Samuel 7:12-16, that thy seed after thee was to be his Lord? And that when Jehovah told him that, in Him, thy house and thy kingdom shall be made sure for ever before thee: thy throne shall be established for ever, that David’s Son would be David’s Lord? Yea, did David know the answer to the question our Savior put before the Pharisees centuries later, when none was able to answer Him a word? The question being, If David then calleth him Lord, how is he his son?

Not only do we see before us the Messiah, David’s Lord, and the promised Prophet, set forth as also King and Priest, but we have a testimonial to the reality of the Trinity. Peter, in his discourse preserved for us by Luke, in Acts 2:32-36; said,

This Jesus did God raise up, whereof we all are witnesses. Being therefore by the right hand of God exalted, and having received of the Father the promise of the Holy Spirit, he hath poured forth this, which ye see and hear. For David ascended not into the heavens: but he saith himself, The Lord said unto my Lord, Sit thou on my right hand, Till I make thine enemies the footstool of thy feet. Let all the house of Israel therefore know assuredly, that God hath made him both Lord and Christ, this Jesus whom ye crucified.

This 110th psalm is absolutely full of Grace and Truth because it is full of Him who is, Himself, Grace and Truth. And here we come upon the centerpiece of the Psalm, when David declares of the One whom He has told to Sit thou at my right hand, until I make thine enemies thy footstool; he declares what the Father says:

Jehovah hath sworn, and will not repent: thou art a priest for ever after the order of Melchizedek.

David had already said—in the Spirit—that this One was his Lord. Jehovah Himself Lord had said to David’s Lord—the Christ—Sit thou at my right hand. And now He declares of this One seated at His right hand; Thou art a priest for ever. Thou art a Priest forever, not just any priest, but a priest after the order of Melchizedek. This Melchizedek whom the writer/preacher of Hebrews speaks/writes, saying at the last:

And what we say is yet more abundantly evident, if after the likeness of Melchizedek there arises another priest, who hath been made, not after the law of a carnal commandment, but after the power of an endless life; for it is witnessed of him. Thou art a priest for ever after the order of Melchizedek.

2 Corinthians 5:20 ‘We are ambassadors therefore on behalf of Christ.’

2 Corinthians 1:3 ‘Father of mercies and God of all comfort.’