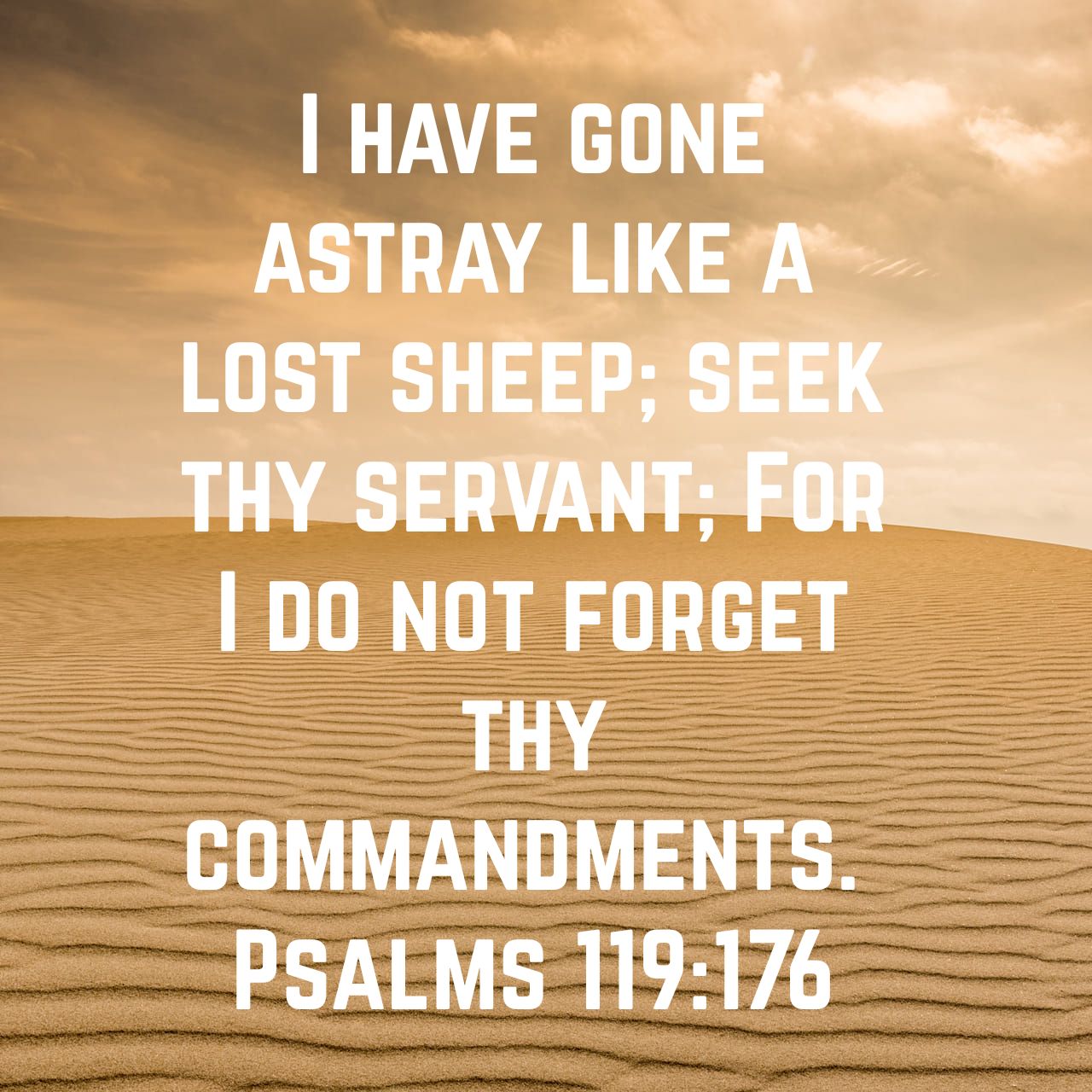 ‘I have gone astray like a lost sheep; seek thy servant.’

While even the ‘Prince of Preachers’, as Charles Spurgeon was called, of London in the 19th century, was forced to concede that he could not with absolute certainty maintain that ‘the man after God’s own heart’ was the inspired author of the 119th psalm, he nonetheless declared his heartfelt views on the matter. In his fine volumes under the title of ‘The Treasury of David’ he has uttered the thoughts of his mind, and heart, with respect to the authorship of this particular psalm, when he said;

“The fashion among modern writers is, as far as possible, to take every Psalm from David. As the critics of this school are usually unsound in doctrine and unspiritual in tone, we gravitate in the opposite direction, from a natural suspicion of everything which comes from so unsavory a quarter. We believe that David wrote this Psalm. It is Davidic in tone and expression, and it tallies with David’s experience in many interesting points. In our youth, our teacher called it ‘David’s pocket book,’ and we incline to the opinion then expressed that here we have the royal diary written at various times throughout a long life.”

Another writer of note, from a very different background than Spurgeon, yet a contemporary, writing upon a different psalm, psalm 57, a psalm that possesses a superscription defining it as, not only from the pen of David, but rendering to it the occasion of its writing, in the following words:

For the chief musician: set to Al-tashheth. A Psalm of David. Michtam; when he fled from Saul, in the cave.

We make no asseveration that psalm 57 has any bearing upon psalm 119, other than this important feature; namely, that it breaths the heart and soul of ‘the sweet psalmist of Israel.’ Witness, as example, the parallel between 57:10 and 119:76, with the employment of the term, lovingkindness, For thy lovingkindness is great unto the heavens, and thy truth unto the skies (Ps.57), and Let, I pray thee, thy lovingkindness be for my comfort (Ps.119), bearing in mind that there are no less than six occasions in Psalm 119 alone of the usage of the term lovingkindness. This word is a favorite of the psalmist being used at least 117 times.

Now this cave to which the superscription alludes, is considered, by most writers, to be the cave of Adullam; see 1 Samuel 22:1ff. It is not outside the realm of our imagination, and from many of our own experiences along with the experiences related to us from others among the children of God from their histories. It is not a strange thing for the introspective believer, while not being aware of any particular sin to, nevertheless, feel themselves as having gone astray like a lost sheep as they find themselves cowering in a metaphorical cave of sorts.  At any rate, we are informed, in the beginning of that 22nd chapter of 1 Samuel, that:

This event follows upon David’s discovering, with no further doubt, that his king, and father-in-law, Saul, was determined to destroy him, to kill him in order to keep the throne of Israel for himself. While David was devoted to king Saul, and married to his daughter, Michal; through which devoted behavior for Saul, largely prevented him from being able to concede that Saul was determined to take his life from him. It was right after Michal, realizing that her father sought to slay her husband, had lowered him from the window of their home and to relative safety. It was after passing through Nob, the home of the priests under Ahimelech, where he obtained some sustenance for himself and his men, as well as the sword of Goliath for himself; this sword that had been stored there in Nob, followed by a brief, but unsuccessful attempt to find shelter with Achish, the king of Gath. that David took refuge in this cave of Adullam. This cave became his home, his refuge, his protection from the searching eyes and ears of Saul. Here he felt comparatively safe, and according to the superscription, wrote psalm 57. The very words and sentiments of the first three verses are readily adaptable even to the state of many in these days. And while we may not be suffering due to the evidently insatiable malice of the one in supreme control over the land of Judah at the time, even Saul, the king of Israel. The fear in the heart and in the thought of David was exposed to our view even in the episode described just before he found his was to relative safety in the cave of Adullam. His inexplicably disgusting behavior expressed by the writer of 1 Samuel, as he makes us to see—we would prefer to close our eyes—through our imagination the great giant Goliath killer, feigning madness before the gate of Gath, scrabbling on the gate and allowing the spittle to run down his beard. We would scarce be able to believe such a thing if it was not found in our Scriptures.

How refreshing and happy it must have been to find refuge from such fears in this cave near Adullam; yea, it seems that he made this cave his headquarters for quite some time, as he zigged and zagged throughout the countryside eluding Saul and his men; always having the safety of the cave to which he would happily return. It is therefore not difficult to anticipate the sort of language his heart would inspire his hand to pen the words as we find them in this 57th psalm; especially verses 1-3. Can we not easily transfer David’s sentiments into our own circumstances during the turmoil of this unexpected global pandemic?  Attempt to do just that as you read the following furtive expressions; how readily our hearts will likely embrace them:

Be merciful unto me, O God, be merciful unto me; For my soul taketh refuge in thee: yea, in the shadow of thy wings will I take refuge, until these calamities be overpast. I will cry unto God Most High, Unto God that performeth all things for me. He will send from heaven, and save me, When he that would swallow me up reproacheth; [Selah] God will send forth his lovingkindness and his truth.

It is not difficult to imagine ourselves in the position of David at the time of his penning the 57th psalm. Are we not even at this present time finding ourselves in something of a cave of Adullam? Can we not relate, in some fashion, to the pleading of the son of Jesse for relief from innumerable evils? Are we not often in need of pleading for relief from many evils? May not the lions, the sons of men with teeth as spears and arrows, their tongues being sharp swords, be assailing us in the form of a pandemic, in the form of economic chaos, in the form of racial unrest and turmoil have us surrounded to the degree that we sympathize entirely with these words?

My soul is among lions; I lie among them that are set on fire, even the sons of men, whose teeth are spears and arrows, and their tongues a sharp sword.

And may we not be brought to cry to our God on High to be our refuge, and our cave of Adullam to protect and preserve us from these assailants? Can we not combine our voices with the psalm-singer; Be thou exalted, O God, above the heavens; Let thy glory be above all the earth, that our God would magnify the glory of His grace and mercy in sheltering us from harm?