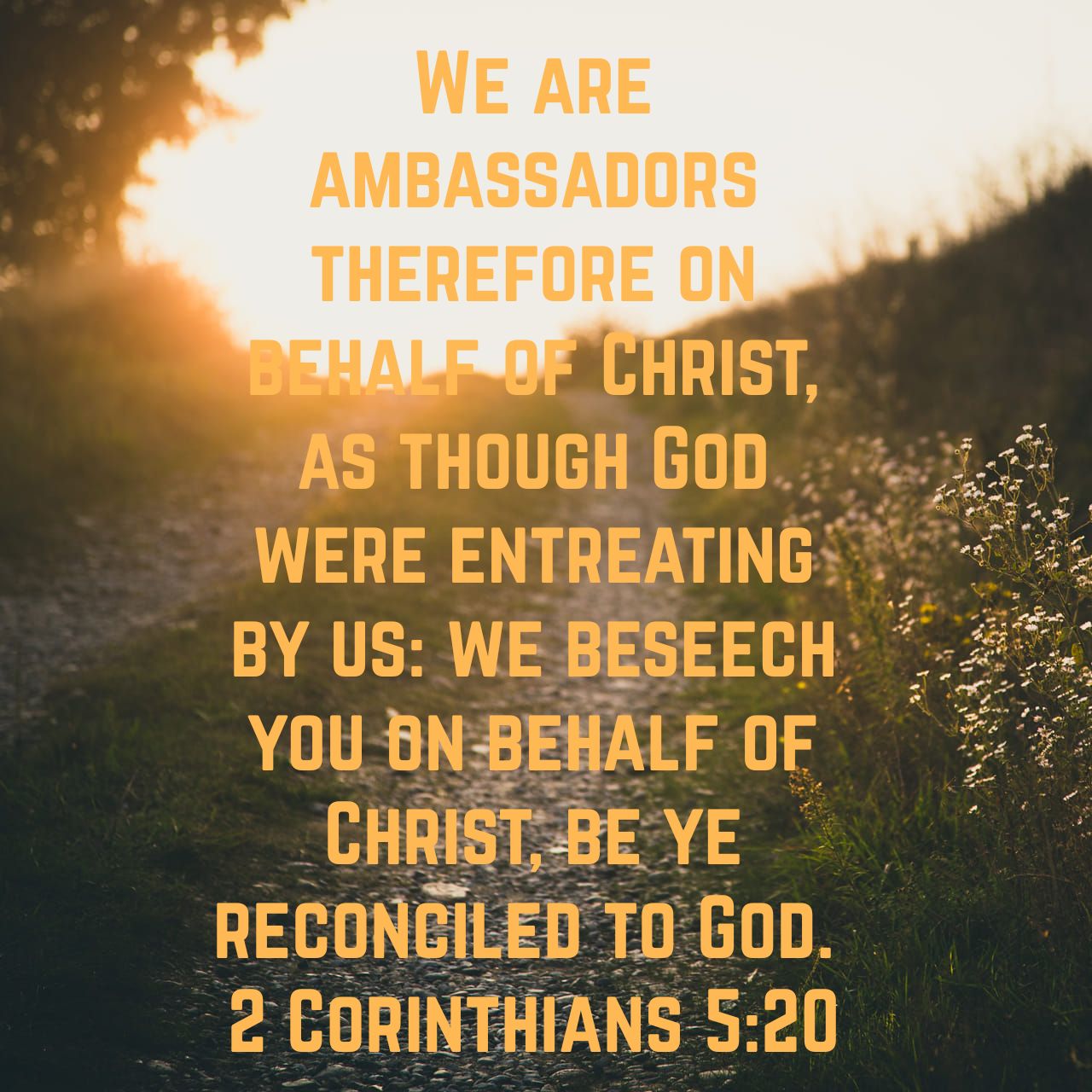 2 Corinthians 5:20 ‘We are ambassadors therefore on behalf of Christ.’

‘We are ambassadors therefore on behalf of Christ.’

What is involved in the office of an ambassador? Indeed, what is an ambassador after all? If we are called to be such, we ought to know what it is.

Qatar is an oil-rich emirate on a peninsula jutting into the Persian Gulf: recently, their ambassador to the U.S., Ali Bin Fahad Al-Hajri, felt compelled to write this statement, ‘We respect the necessity of special security precautions involving air travel, but this diplomat was traveling to Denver on official embassy business on my instructions, and was certainly not engaged in any threatening activity.’ This was a statement following the detention of a passenger on an airliner bound from Washington, D.C. to Denver, Colorado. This person had evidently sequestered himself in the bathroom to smoke a cigarette (such smoking was prohibited). When flight attendants noticed smoke coming from the bathroom, they notified federal marshals who in turn inquired of Mohammed al Modadi as to what he was doing. The response they received was that he was trying to light his shoes on fire; most likely an abortive attempt at sarcasm which went unappreciated by the marshals. They forthwith detained him for interrogation. This provoked something of a mini-international incident since the man was allegedly on a diplomatic assignment and therefore entitled to diplomatic immunity. Consider the embarrassment of the Qatar ambassador because of the behavior of this representative. It is not surprising that he responded almost indignantly with respect to ‘his man’ being taken into custody, since the best defense is often a good offense. While he really had no defense, and this ‘good offense’ was definitely offensive and done out of felt political necessity, we would nonetheless imagine that he was quite non-plussed about the matter, as well as very unhappy with his smart-aleck underling.

What is the job of an ambassador; what are his responsibilities, and who is he responsible to? A dictionary definition is, ‘An ambassador is the highest ranking diplomat that represents a nation.’ ‘We are ambassadors therefore on behalf of Christ,’ Paul has said to the church at Corinth, and this is therefore equally spoken to every subject of the Lord Jesus Christ, everyone who has, through faith, become a citizen of His kingdom. Though, it is very likely that Paul was speaking primarily of those called to the ministry of reconciliation as preachers and pastors of the Word, it must still be understood that every believer, even if not an ambassador in the same sense as those in the ministry, is yet a part of the ‘diplomatic corps,’ and thus a representative of the country of his, or her, citizenship which is for believers, the kingdom of Jesus Christ.

May we never behave in such manner that the King must needs write such a letter as this ambassador found necessary to try and defend the actions of his subordinate. A further definition of ambassador is, ‘An official messenger sent by, or to, a sovereign of public body; a minister of high rank sent by one sovereign or state on a mission to another.’ This is what the apostle says that ‘we are.’ Who is the ‘we’ of that statement? It is most likely he that refers to himself along with other apostles. This would be the ministry inherited, as it were, by all those who follow in their footsteps by preaching the gospel of reconciliation to the world. Again, while it may be that the while the immediate application is to these ‘first-line’ proclaimers of the gospel of Jesus Christ, there is certainly no cause to exclude all believers for the simple reason that every saint is to reflect the Lord Jesus Christ before this world. This passage may be paralleled with that known as the Great Commission found in Matthew 28:19, which many believe refers primarily to the apostles and their successors, yet it must be said, that while all are not called to preach in the church, that all are witnesses; all are to be martyrs in the sense of presenting our bodies a living sacrifice by exposing and reflecting Christ before our neighbors, friends, and family. While we are not all ambassadors, we might say, we are all of us to be active in diplomacy, ready to speak and to live for our liege, our Sovereign, Jesus Christ. We happily concede that the persons to which both of these admonitions or exhortations is made are those who are called to follow in the footsteps of the apostles, and to whom belongs therefore the primary responsibility of calling sinners to be reconciled to God and of making disciples of men. Yet, as citizens of this kingdom, can we expect to be free from responsibility in the all-important matter of following the King as He reconciles the world to His Father through faith in His blood? The huge difference is from the fact that Qatar’s ambassador in Washington sought to excuse and justify a man who also represents the government of Qatar. And while Christ is, of course, God Himself manifested in the flesh, He, as man, is God’s ambassador to the world He created. And are we not His subordinate representatives, even as those in Asia Minor in the first century? This Ambassador did not, and does not, excuse and justify behavior that brings reproach upon His kingdom. He calls His people to an account, just as those given the talents were responsible to their master to do what they could to enlarge his estate, so our Lord Jesus Christ will call upon us to give an account of what we have done with the responsibility that has been given to us as His diplomats, representatives of His kingdom to the kingdom of this world. We have been place in the church and the church is, as it were, His sovereign territory from which sovereignty we conduct business for Him in this foreign land in the midst of which we have been established.

Daniel 4:37 ‘Now I, Nebuchadnezzar, praise and extol and honor the King of Heaven.’

Daniel 4:37 ‘Now I, Nebuchadnezzar, praise and extol and honor the King of Heaven.’

John 6:66 ‘Upon this many of his disciples went back, and walked no more with him.’

John 5:25 ‘The hour cometh, and now is, when the dead shall hear the voice of the Son.’