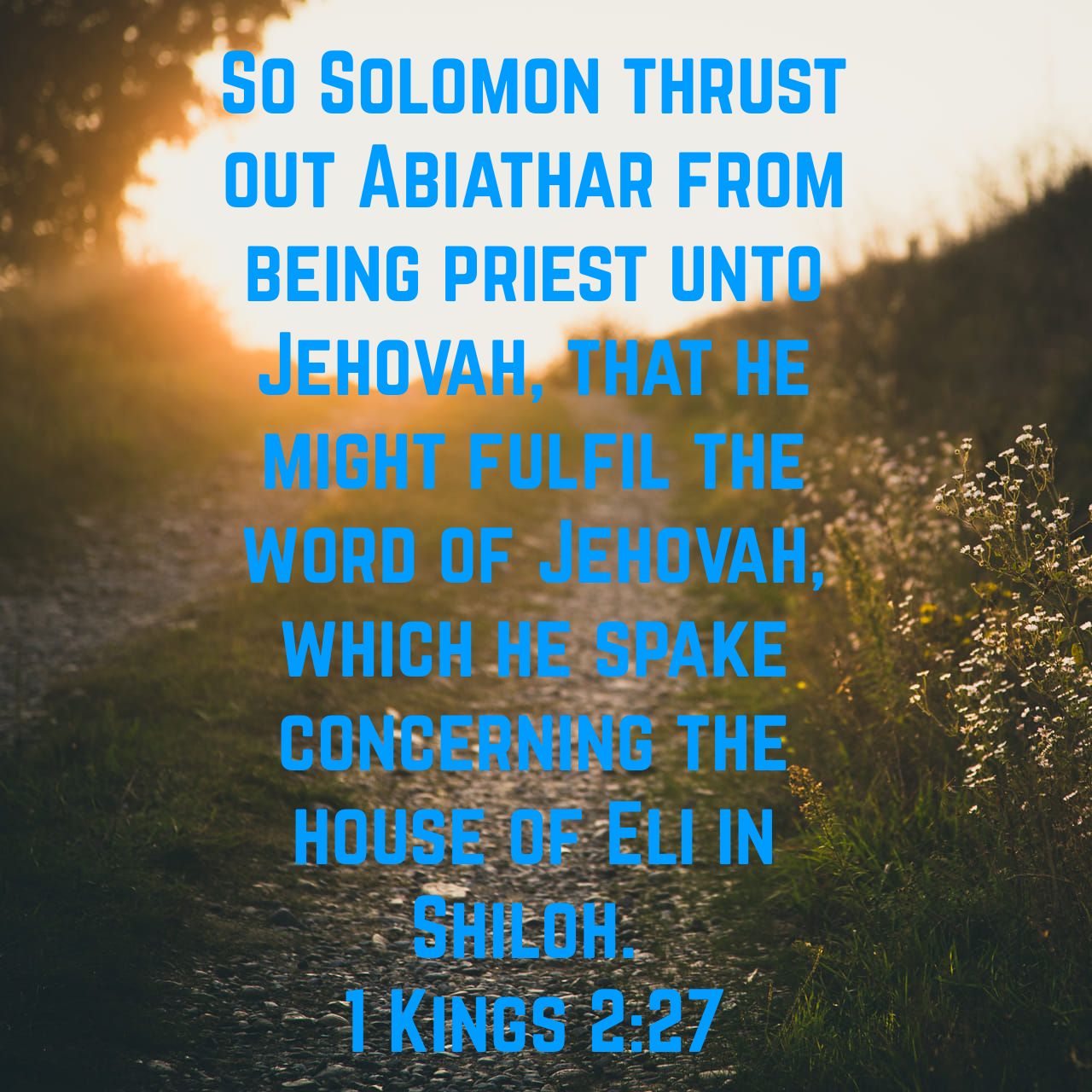 And unto Abiathar the priest said the king, Get thee to Anathoth, unto thine own fields; for thou art worthy of death: but I will not at this time put thee to death, because thou barest the ark of the Lord Jehovah before David my father, and because thou wast afflicted in all wherein my father was afflicted. So Solomon thrust out Abiathar from being priest unto Jehovah, that he might fulfill the word of Jehovah, which he spake concerning the house of Eli in Shiloh.

What is the reason for which the Holy Spirit wishes to point us to reflect upon this matter of Eli in Shiloh; what was that all about, and how does it relate to Abiathar? What is the word of Jehovah, which He spake concerning the house of Eli in Shiloh? What was that all about? The answer is discovered in 1 Samuel 2:27-36. We are given in the first book of Samuel, an account of the priest, Eli, in Shiloh. The account is actually rather brief, but in spite of its brevity, it contains many kernels which produced extensive and long-lasting ramifications and lessons for believers throughout the ages. The passage from 1 Kings 2 provides a simple summation, as it were, of the fulfilment of a pronouncement made to Eli many years before 1 Kings.    An attempt to reproduce the account of the behavior which brought about a summary judgment against Samuel and his line of priesthood may here be offered. Eli was the priest in Shiloh that Hannah, the wife of Elkanah, and intended mother—intended by Jehovah—of Samuel, who would become the judge that anointed David to be the successor of King Saul over Israel. This judge, Eli, is he that misjudged Hannah as she prayed (silently) unto God that He would give her a son according to her desires. Eli saw her lips moving without any utterance and judged that she must be drunken. Thus he accosted her in comparatively rough language, according to the writer of 1 Samuel; he said, How long wilt thou be drunken? put away thy wine from thee. Yet, after explanation given, the priest blesses in the following manner, saying,

Go in peace; and the God of Israel grant thy petition that thou hast asked of him. The petition being, as we have said, that she might bear a son. She made promise to God that, if her request were granted, she would grant the child unto Jehovah. And so, after Samuel was weaned, she surely kept that vow and brought him unto Eli that he might serve Jehovah for life. Following this ‘offering’ of her son, Hannah prayed that magnificent prayer recorded in the first several verses of 1 Samuel, chapter two.

Subsequently, the reader is apprised of the wickedness of the two sons of Eli, namely, Hophni and Phinehas. These two were in the priesthood with Eli. We are told that they were base men; they knew not Jehovah. We are supplied with a knowledge of some of their wickednesses; their sacrilege and immorality is expressed. One writer has summed it up cogently and concisely: “They used the priestly office merely for livelihood.” It was this that brought against the house of Eli this terrible prophecy which was given to Samuel, still but a child, and rehearsed by him into the ears of Eli the following morning:

And Jehovah said to Samuel, Behold, I will do a thing in Israel, at which both the ears of every one that heareth it shall tingle. In that day I will perform against Eli all that I have spoken concerning his house, from the beginning even unto the end. For I have told him that I will judge his house for ever, for the iniquity which he knew, because his sons did bring a curse upon themselves, and he restrained them not. And therefore I have sworn unto the house of Eli, that the iniquity of Eli’s house shall not be expiated with sacrifice nor offering for ever.—1 Samuel 3:11-14.

Here we are brought to bear in mind (and heart) that the promises of God, whether for good or bad, shall never fall to the ground. Many years may intervene, as they did in this case, between the pronouncement and the fulfillment, but mark well; fulfillment shall come. And mark equally well, that this judgment against Eli was not for something that he had done, but for something that he miserably failed to do: Jehovah’s complaint against Eli was in these words; that he restrained them not. How many parents strive to give their children everything that they feel they need, except for restraint; they give them no restraint. Now these things happened unto them by way of example; and they were written for our admonition.—1 Cor. 10:11.

We may now return to our focus passage at 1 Kings 2:27. Adonijah has been executed for his attempted coup of the throne of Solomon; subsequently, Joab, his accomplice in the coup, also executed. After Adonijah and Joab are dealt with, Solomon ‘executes’ judgment against Abiathar for his complicity in the matter. He effects the fulfillment of the prophecy that had been given to his ancestor, Eli, and displaces him from the priesthood, bringing to an end, that priestly line. Abiathar was the son of Ahimelech, and the sole survivor of Saul’s massacre of the priests of Nob (1 Samuel 22:20). Ahimelech was the son of Ahitub, who was himself a son of Phinehas, one of the two sons of Eli whose wickedness brought about this prophecy. So that Abiathar was a great-great-grandson of Eli the judge/priest in Shiloh. He was the fourth generation from Eli. Well could God have spoken to Eli, as He largely did, saying, Did I not choose him [ your father, Ithamar] out of all the tribes of Israel to be my priest? Jehovah complains, as it were, to Eli by reminding him that He set his family in the priesthood when He Eli’s father, Ithamar, to be a priest unto me, and you repay me by ‘honoring thy sons above me.’ The one that will put his son in honor above me has made a poor choice, indeed. Jehovah extends His comments upon this matter as He proceeds in words most severe and stern. Does this not give us an estimation of how our God feels about His people honoring Him, or not? He has stated in most clearly in His remonstrance with Eli (1 Samuel 2:30-31):

Therefore Jehovah, the God of Israel, saith, I said indeed that thy house, and the house of thy father, should walk before me for ever: but now Jehovah saith, , Be it far from me: for them that honor me I will honor and them that despise me shall be lightly esteemed. Behold, the days come, that I will cut off thine arm, and the arm of thy father’s house, that there shall not be an old man in thy house.