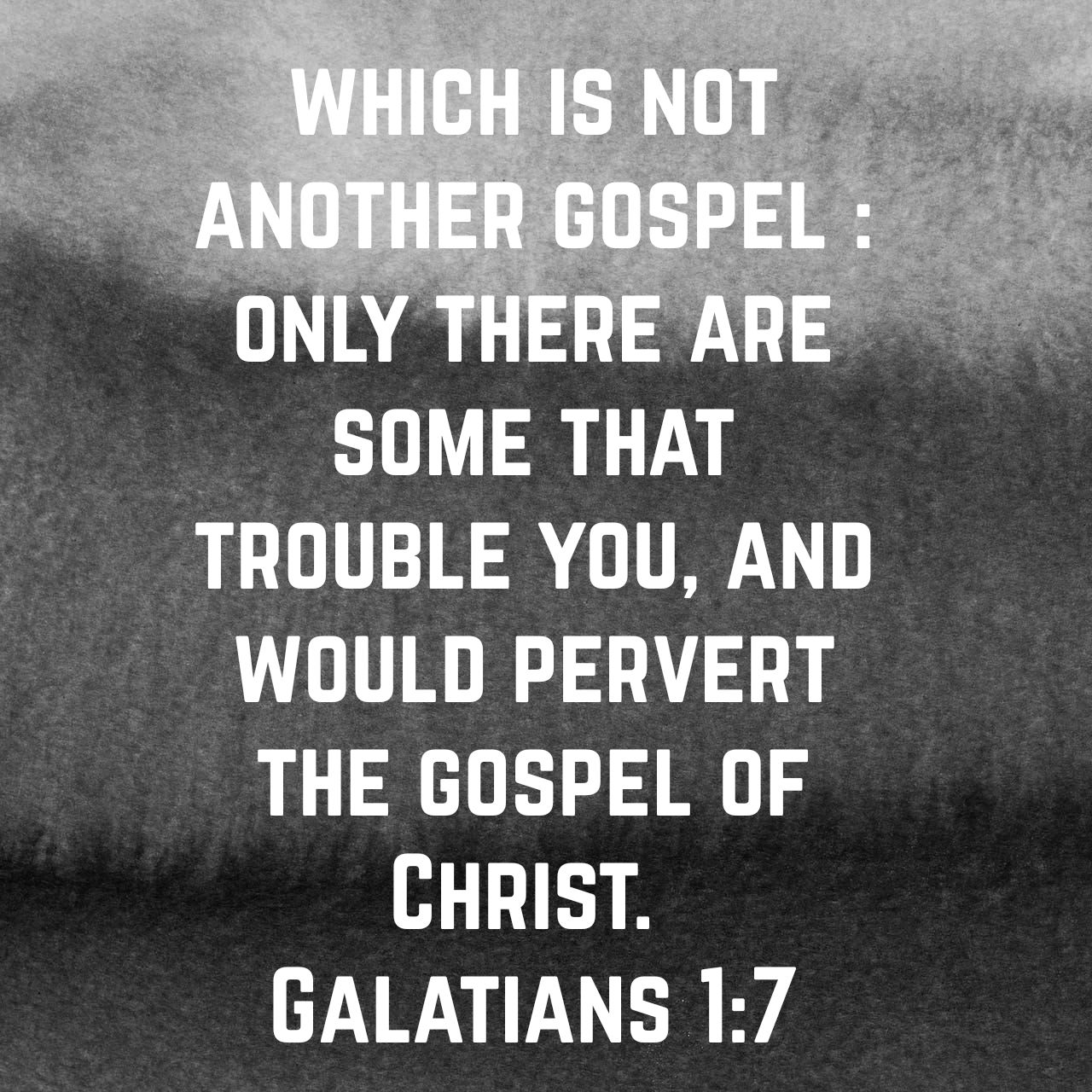 ‘There are some that trouble you, and would pervert the gospel of Christ.’

Paul continues, in his epistle to the churches of Galatia, to speak of what he has called ‘a different gospel.’ What has he said is this thing, this ‘different gospel?’ He defines this in the next verse, verse eight, where he has written, But though we, or an angel from heaven, should preach unto you any gospel other than that which we preached unto you, let him be anathema [accursed]. This ‘different gospel,’ then, is any gospel other than that which Paul preached unto them; that which all the apostles of Jesus Christ preached. Anything else was another gospel; a false gospel.

Just what is the gospel then that Paul and the disciples of Christ preached? Has he not laid it out for us, even in his greeting to the churches of Galatia? He began this epistle with the language of the gospel when he declared, Grace to you and peace from God the Father, and our Lord Jesus Christ, who gave himself for our sins, that he might deliver us out of this present evil world, according to the will of our God and Father, to whom be the glory for ever and ever. Amen.

And they are the following:

Paul asserts, yea, insists, that his gospel is the only way that men, a man or a woman, may ever find grace and peace with God, for it comes from God the Father, he declares. It is the Way to Grace and Peace with God the Father, and it is the only way. Paul states in subsequent verses that there are those who would be bringing to the Galatians a ‘different gospel,’ or, ‘another gospel,’ than that which Paul had set before them. But his way is the only Way. He marvels at the Galatians that they who had received his gospel could be so quickly, and apparently easily, removed from his gospel to another which was no gospel at all. And how will God the Father accomplish this Way? Well, I will tell you, says the Apostle to the Gentiles. It is He that is Himself the Way the Truth and the Life; my darling Son, Jesus Christ, has made a way through the giving of Himself to satisfy the justice of God against those who had rebelled in Adam (which means all the sons—and daughters—of Adam) by, as Paul states, gave himself for our sins. How could He give Himself for our sins? The prophet Isaiah has informed mankind years ago. We may read of it in the 53rd chapter of his book, under his name; often fondly referred to as the gospel of Isaiah. Here may we read of that famous and marvelous exchange determined by the Father.    Surely he hath borne our griefs, and carried our sorrows; yet we did esteem him stricken, smitten of God, and afflicted. But he was wounded for our transgressions, he was bruised for our iniquities; the chastisement of our peace was upon him; and with his stripes we are healed. All we like sheep have gone astray; we have turned every one to his own way; and Jehovah hath laid on him the iniquity of us all.

Paul has spoken and written often of the Way of Life through Jesus Christ. He has demonstrated in his letter to the Romans (5:1) that the answer to the question of Job (9:2), How can man be just with God, is Jesus Christ. Being therefore justified by faith , we have peace with God through our Lord Jesus Christ. And we could say that he gave himself for our sins, that through faith in Him, we have peace with God. Jehovah hath laid on him the iniquity of us all, as Isaiah wrote, that we may have peace with the Father through faith in the blood of the Son. The beautiful exchange is simply this; God has laid our sins on His Son, imputing His righteousness to us. God’s way of salvation for His chosen is through the blood of the Lamb of God who has taken our sins upon Himself.

The apostle’s John and Peter have each contributed their thoughts on this wondrous blessing of the Way of Life made available to men through the preaching of the gospel of Jesus Christ. John shares with us the words of Christ (6:44), No man can come to me, except the Father that sent me draw him. Who does the Father draw? Jeremiah tells us (31:3) Yea, I have loved thee with an everlasting love: therefore with lovingkindness have I drawn thee. God has designed from the foundation of the world to save a people unto Himself. These He has placed in His Son from before the foundation of the world. The Son has agreed to redeem them through His death upon the cross of Golgotha in the fullness of time. The Father sent the Son; the Son happily agreeing to come (Psalm 40:7), Lo, I am come; In the roll of the book it is written of me. The Father sent His darling Son to die; the Son was born to die, and He came happily to lay down His life for His own, that they might be redeemed. Peter sets his imprimatur to this in his sermon preserved for us by Luke in Acts 2:23, him, being delivered up by the determinate counsel and foreknowledge of God. Christ gave Himself; the Father gave His Son, that, he might deliver us out of this present evil world.

We were sanctified in the beginning when we were ‘set apart’ in Christ: that is an important meaning of the word, sanctified, namely, set apart. And this was as we saw from Peter’s sermon and throughout Scripture, according to the will of our God and Father. In other words, this was His plan from the beginning. It was no afterthought. Salvation was not a ‘plan B.’ The sin of Adam did not take Jehovah by surprise. That is why His chosen were placed in Christ before the foundation of the world: yes, before Adam was created and, surely, before he sinned in Eden. Nothing happens apart from the will of God. Knowing that we were in Christ though electing grace; knowing that we would be in Adam through generation; it was determined that Christ would come in the fullness of time to rescue us from our fall. He would restore us to the grace of God through atonement He would make at Golgotha. We would be restored to the loving embrace of the Father through the loving death of the Son; restored to fellowship with the Father, the Son, and the Holy Spirit. May we never pervert this gospel of God; To whom be the glory for ever and ever. Amen.

This Week’s Focus Passage: Jeremiah 6:16 ‘But they said, we will not walk therein.’

This Week’s Focus Passage: James 1:18 ‘Of his own will he brought us forth by the word of truth.’

This Week’s Focus Passage: Luke 24:27 ‘He interpreted to them in all the Scriptures the things conce